Happenings
Home Be Immersed in “Many Nations, One Family”

Be Immersed in “Many Nations, One Family”

Students and graduates know first-hand that it is hard work staying in school—semester after semester, year after year. In this short series, Many Nations, One Family, students and graduates share reasons why they decided to stay in school at the Institute of American Indian Arts (IAIA). Aside from earning a degree, additional benefits include access to studios and supplies, professional equipment, Library and Counseling resources, and peer-to-peer engagement. IAIA students are part of a unique Indigenous legacy formed by resilience and unity, and together they are Many Nations, One Family.

If you’re a student who has taken time away from IAIA or you know one who has, now is a great time to re-enroll. Need financial aid assistance? IAIA provides an extensive listing of over 50 scholarship opportunities on the Financial Aid page—plus, financial aid advisors are available to help. To assist IAIA with planning and student’s needs with laptops and Internet, students are encouraged to fill out the IAIA Returning Student Preparedness Survey. 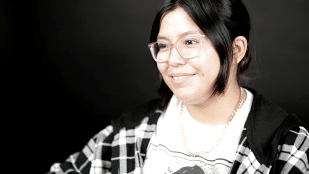 IAIA student Fonzy Nequatewa (Navajo/Hopi) ’25 explains how she has roots at IAIA, which allows her to continue to grow. Even though she took a gap year during the pandemic, she returned to IAIA, and with a new perspective.

“I enjoy going where my mom went for her art experience. Now I’m going, and I’m setting a new path off from the artists in my family by going into cinematic arts to make Indigenous films. I basically grew up in Santa Fe from going to Santa Fe Indian Market, so I’ve been coming here since I was in the womb! When I first discovered IAIA in my hometown in Flagstaff, AZ, this school called out to me.

When I first came here, I was a Performing Arts major. When COVID hit, I decided to take a gap year, and during that time, I decided to go into Cinematic Arts and Technology because I grew up on movies. My mom is really proud of me for attending IAIA and for doing what I want to do. Movies are very enjoyable and I want to be behind the camera for once.”

Another IAIA student who took time off and decided to return, Michael Bozzuto (Taos Pueblo) ’23 says that the connections he’s made with peers have been authentic and life-saving. 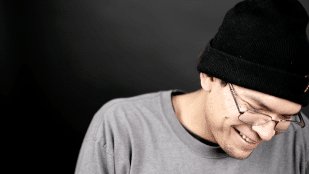 “It wasn’t entirely my decision to take time off. I’ve been a chronic alcoholic for more than half my life and, because of that I was kicked out of IAIA. But it was my decision to come back. I went to rehab, I got really spiritual and into meditation, and I decided to write a letter of apology to IAIA and explain my change of behavior and consciousness. I was readmitted and when I returned everyone was happy to see me and I thought that was a beautiful thing.

It’s nice to be in a creative environment and draw inspiration from other artists who work in various different mediums. It gives me a different perspective to see how they see things. I’m so happy I’ve made these connections. Sometimes you just need someone to talk to, human energy, someone to witness.

Now, I’ve been sober for 14 months and I’m glad I decided to write those words of apology and account for what happened. This is the best way for me to stay on track. Recently, I lost my mother, and she really wanted to see me graduate. So, my finishing, it’ll count for something.” 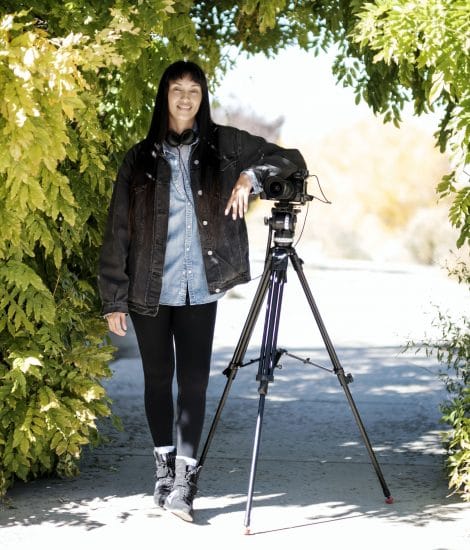 IAIA Student Alica J. Mteuzi (Caddo Nation, Cheyenne-Arapaho) ’23 had to take a semester off from IAIA because she is a mother and had family priorities. She said she is so grateful that it was only one semester she had to take off, and she is happy to be back, because what keeps her at IAIA is the same thing that brought her here in the first place.

“There is no other experience like being at a tribal art school—being amongst your peers, being taught by people who are from your heritage. I didn’t know there was a such thing as a tribal college, much less an art college that was specifically for Indigenous students. Prior to coming to IAIA, I struggled, as many others do, with my Indigenous identity. I had apprehensions and some self-consciousness. I didn’t necessarily connect or have a great understanding of my heritage.

After my first semester, I learned that my experience was not unique. Many other students had the same exact story, either because they’re mixed, or because of removal from their Native lands, or because they were adopted. Everybody comes from different backgrounds, and because of that, I immediately felt right at home.

When I found out about IAIA, it was a no-brainer. This is where I should be. Despite challenges with the COVID-19 Pandemic and other things that are going on in the world, I’m here, because I look at being a student and graduating college as my job. I will be a first-generation college degree holder. I’m not only here to represent my family, but to be a role model for my children.

If you’re thinking of coming to IAIA, you should already be here. Don’t hesitate. Just come.” 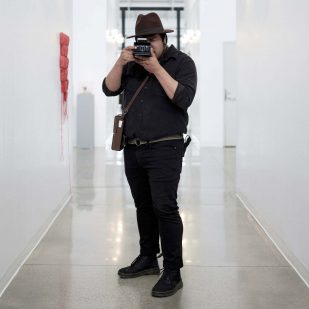 IAIA Student Derrell Lopez (Navajo) ’23 said the connections he‘s made at IAIA, with peers and faculty, have given him the full art school experience and are the main reason why he’s never wanted to take a semester off.

“We’re all just one big family. We all support each other.

I’ve been working with Arista, the photography professor, in work-study, and I really enjoy that, just being able to help others who need extra time in the studios. I really like giving back to the studio and to my fellow peers.

IAIA has really pushed me further to keep enduring in my art. I’ve also enjoyed the many art forms at IAIA. When I first got to Santa Fe and got into school, I was mainly just focusing on photography, but as the weeks and months progressed, I fell in love with all the many art forms that are offered. I really enjoyed just exploring the opportunities and connecting with other artists.” 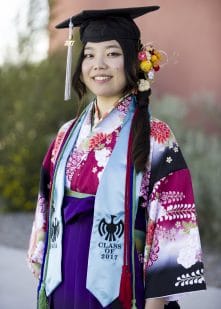 IAIA Alumna Nami Okuzono (Japanese) ’17 said she wouldn’t be where she is today without the help and support from faculty, staff, peers, and Learning Lab tutors.

“The IAIA Community—faculty, staff, peers—were really supportive. But I have to say that the Learning Lab tutors were instrumental. The tutors were good listeners, and they helped me—daily. That’s what kept me going.

Because I was an International student, I wasn’t able to take a semester off, otherwise I would not be able to stay in the US. Even so, I was focused on meeting the requirements to pursue my education.

Engaging with classmates in the studio, working towards projects with peers, and supporting each other, was equally important. It’s true that I am from Japan, and nearly all of my classmates were from other places too, and that resonated with me. I looked forward to the times when I could share ideas with my peers, my friends, you know.

One of the most significant benefits was being a work-study student, where I worked for the Online Learning and Facilities departments. I learned so much on the job, and it also provided a sort of financial aid.”

Nami, who is an IAIA Alpha Chi National College Honor Society member, recently accepted a position at Automattic, Inc. Her position title is “Happiness Engineer,” which is funny, because IAIA staff and faculty couldn’t be “happier” for Nami! 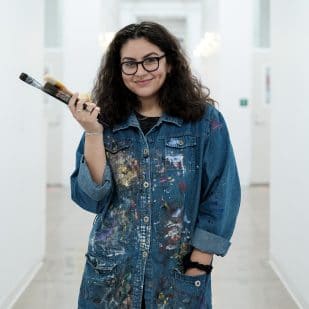 IAIA Student Monika Guerra (Mexican-American) ’22 said that she debated taking time off during the start of the COVID-19 Pandemic, but the more she thought about it, the more she knew that the choice was easy—stay in school.

“I was thinking about taking time off from my studies, but I was like, you know what, I like what the school has to offer—studio-wise, all the equipment, and supplies—I mean, being in Roswell, New Mexico, I don’t have access to any of that. Without the equipment, I’d limit myself and the art I was producing, specifically the quality of my art. If I took a semester off, I know that I would stagnate and not push myself as much, plus I work better in a studio environment, which keeps me focused. By staying in school, I decided to take whatever classes were available, and I was happy that I did because I discovered other mediums like ceramics, printmaking, and photography. I was like, oh, I kinda like these new mediums. I have learned to be more flexible and have learned how to do more than one thing, like painting. I wouldn’t know what I was missing if I didn’t push myself to stay in school.

The main reason I decided to stay in school is to finish my degree as soon as possible. IAIA provides a lot, and there is no limit to what you can achieve. Sometimes I surprise myself with the quality of work that I put out. And, having close relations with my instructors has helped to take my art further and has provided more opportunities outside of school. In fact, during COVID, I’ve had more opportunities in 2020 than any other year.

I am not the type of person to go out of my way to make new friends (I spent a lot of time in the studio). I’ve made new friends along the way, and they’ve been a huge part of accelerating my art because, you know, we challenge each other. I’ve found that peer connections are indispensable at IAIA.”