Join IAIA Artist-in-Residence (A-i-R) artists Darren Vigil Gray, Monique Sonoquie, and Brent Michael Davids for free dinner in the Balzer Gallery in the Academic Building on the IAIA campus from 5:00-5:45 pm, followed by tours of the artists’ studio spaces from 5:45-7:00 pm. Free and open to the public.

He holds Bachelors and Masters degrees in Music Composition from Northern Illinois University (1981) and Arizona State University (1992) respectively, trained at Redford’s Sundance Institute, and apprenticed with Oscar-winning composer Stephen Warbeck (Shakespeare in Love). He has garnered the Distinguished Alumni Awards from both of the universities he attended, NIU (1996) and ASU (2004). In 1983–1984, he was Composer-In-Residence at Graceland College, Iowa.

Many of Davids’ works employ traditional Native American instruments and varied instruments of his own design, including his signature quartz crystal flutes. As an Educator, he founded the award-winning Native American Composer Apprentice Program in Arizona (2000), and the Composer Apprentice National Outreach Endeavor in Minnesota (2005) and in Wisconsin (2015), to teach Indigenous youth to compose their own written music. In 2004, Davids founded the First Nations Composer Initiative as a virtual chapter of the American Composers Forum, serving as its first Artistic Advisor. 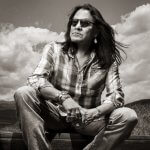 An artist with feet in the contemporary world, Darren Vigil Gray (Jicarilla Apache/Kiowa Apache) draws his expression from a modernist arena where formal concerns such as composition, line, brushwork, even subject matter pay homage to an artist’s subjective experience. Raised on the isolated Jicarilla Apache Reservation in north-central New Mexico, the son of a Jicarilla Apache father and a Kiowa Apache mother from the Southern Plains of Oklahoma, Gray is the only tribal member of his generation to establish himself as a major figure in the contemporary art world.  Since 1987, he has shown regularly in Santa Fe’s leading galleries. Currently he is represented by The Gerald Peters Gallery and his annual Indian Market shows prove to be highly regarded and successful. As a modern Native American, he ventures to confront the two worlds in which he exists—keeping one foot in the modern world without compromising the elements of the natural world which feed and nurture his spirit. He is constantly challenging himself, finding new ways to bring life to the dead two-dimensional realm of his painting. In this aspect, Gray is the mediator between the earthly realm of paint, and the unearthly realm of artistic creation.