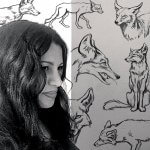 Christa Cassano (Confederated Tribes of the Colville Reservation, Arrow Lakes Band) is a visual artist and storyteller living in Philadelphia, PA. Her work has been exhibited internationally and explores themes of alienation, violence, and insurgence, often with depictions of animals as human stand-ins as a way to mark aspects of society’s complex and many times absurd relationship to nature. In 2016, she was nominated for an Eisner Comics Industry Award for co-adapting John Leguizamo’s One Man HBO Show, Ghetto Klown, into a graphic novel, and has contributed political cartoons to the RESIST! Newsletter distributed at the Women’s March on Washington 2017 and the comix anthology A.P.B. (Artists against Police Brutality).

She has been a 2016 Artist-in-Residence at Yaddo and a 2012 Associate Artist at the Atlantic Center for the Arts, which prompted a focus away from fine art into comics making. Cassano received scholarships and classical training from Cooper Union School of Art and The Art Students League of NY, is a two-time Lloyd Sherwood Grant recipient, and winner of the EspoArte2003 Award for Excellence in Contemporary Art, among others. She is currently writing and drawing her own graphic series.