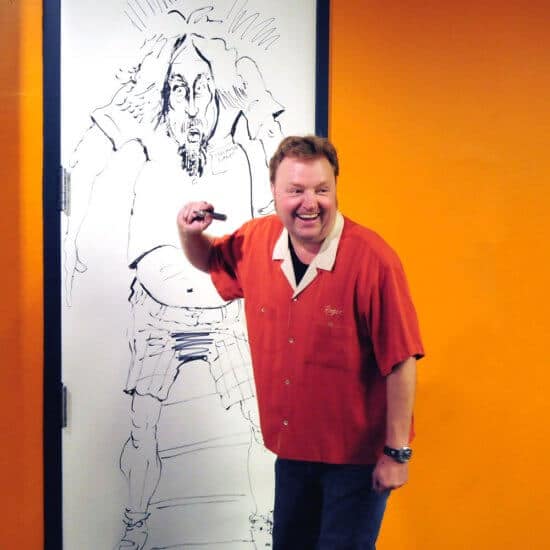 Introduction to Storyboarding taught by storyboard artist J. Todd Anderson is a unique workshop that offers film students a chance to learn from a working professional on how to draw and create a storyboard. Each student will leave with their own storyboard book that is signed by J. Todd Anderson.

Please RSVP to Marisa X. Jimenez at marisa@stagecoachfdn.org. Introduction to Storyboarding is made possible by a partnership between IAIA and Stagecoach Foundation.

J. Todd Anderson is a storyboard artist who has worked primarily with the Coen brothers, but also with an array of other filmmakers. He also, along with film archivist and friend George Willeman and WYSO D.J. Niki Dakota, produces Filmically Perfect. He made his directorial debut in 1998 with the film The Naked Man.  A few years later, he served as Second Unit Director on the Coen brothers’ Intolerable Cruelty, which earned him membership in the Directors Guild of America.

Anderson received credit for appearing in Fargo as “Victim in Field.” Instead of his name being used, he was credited with the symbol for the artist formerly known as Prince, which was turned on its side and a smiley face drawn in the circle. In addition, his name was used in the 2010 film True Grit as one of the many aliases for the outlaw Tom Chaney.

Anderson has stated that his role as storyboard artist is “less creative than interpretive.” When working with Ethan and Joel Coen, the Coens go through the movie shot by shot, and Anderson works to “establish the scale, trap the angle, ID the character, get the action.” Afterwards he sits and does a more polished drawing from the sketches drawn with the directors. After getting feedback from the filmmakers and adding several details, such as facial expressions, necessary props and arrows depicting actor and camera movement, the drawings are photocopied and given to everyone on the set. Thus, the storyboards Anderson creates are vital to the smooth process and good communication on the film set.

A storyboard is a graphic organizer in the form of illustrations or images displayed in sequence for the purpose of pre-visualizing a motion picture, animation, motion graphic or interactive media sequence. The storyboarding process, in the form it is known today, was developed at Walt Disney Productions during the early 1930s, after several years of similar processes being in use at Walt Disney and other animation studios.