I hope you’re all staying safe and healthy. We meet on the first Monday of the month. We want to know more about you and your futures. You can join us online, where we collaborate and uphold the values of our IAIA community. Please send us an email at alumni.council@iaia.edu for more information or visit the IAIA Alumni web page.

This year, we are putting together some new things. We are meeting our commitments with the talents of each of our elected members. We all bring a wealth of experience, and we hope you bring yours too. Let us know what we can do for you! 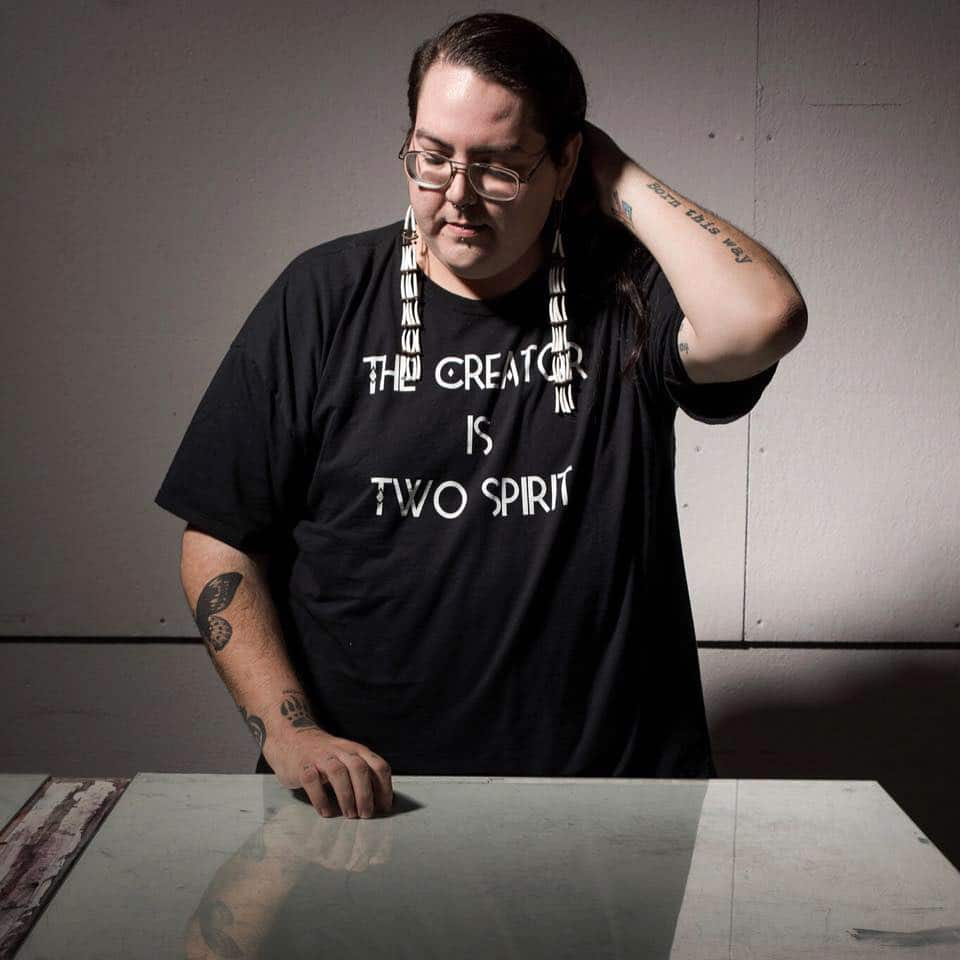 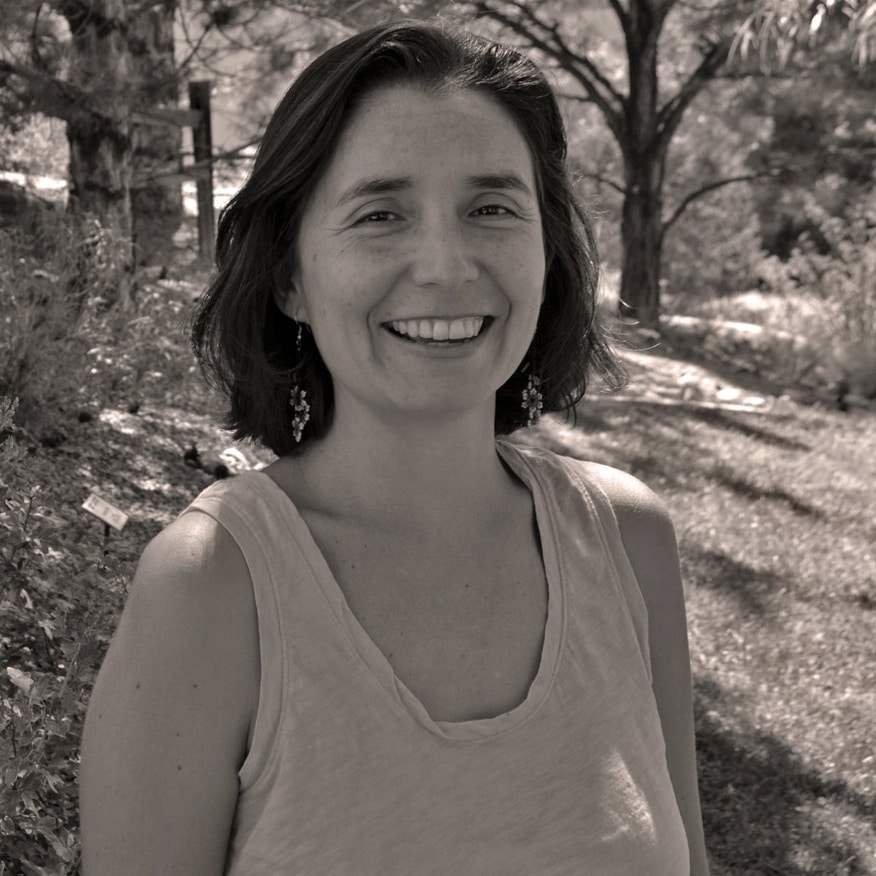 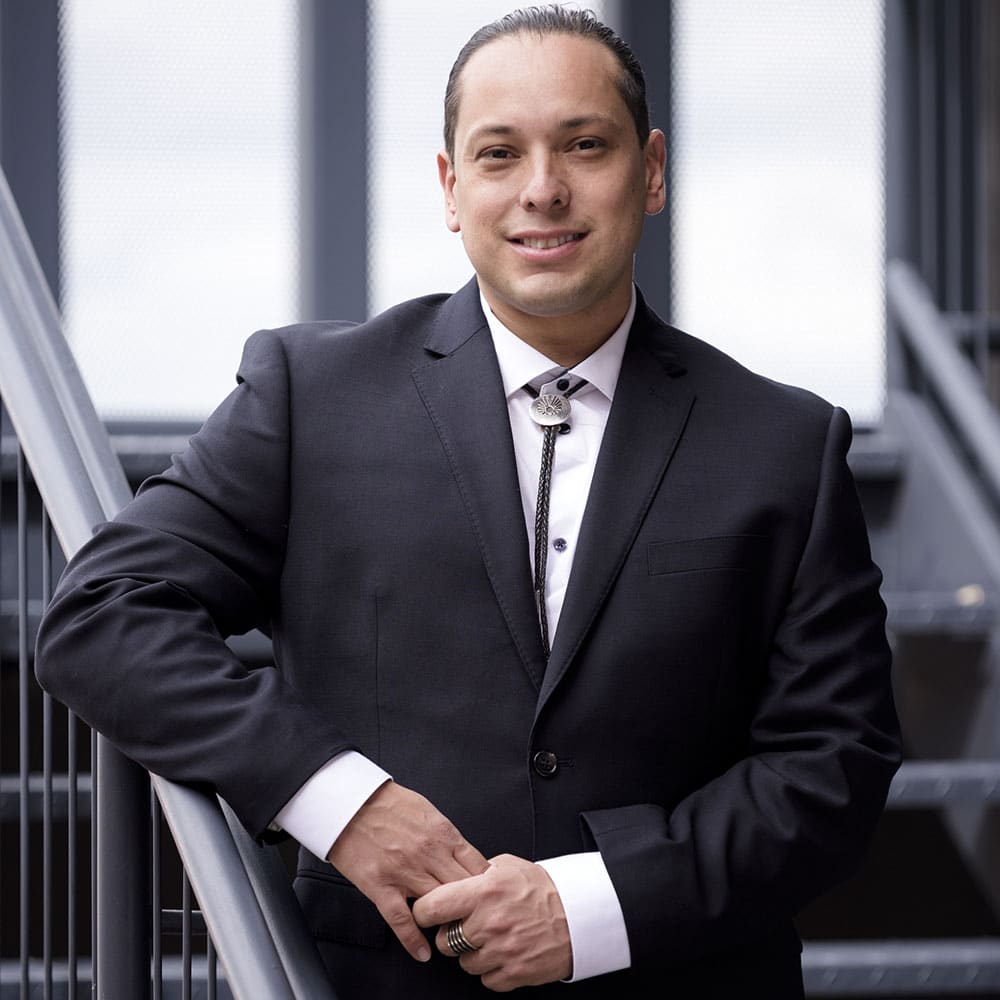 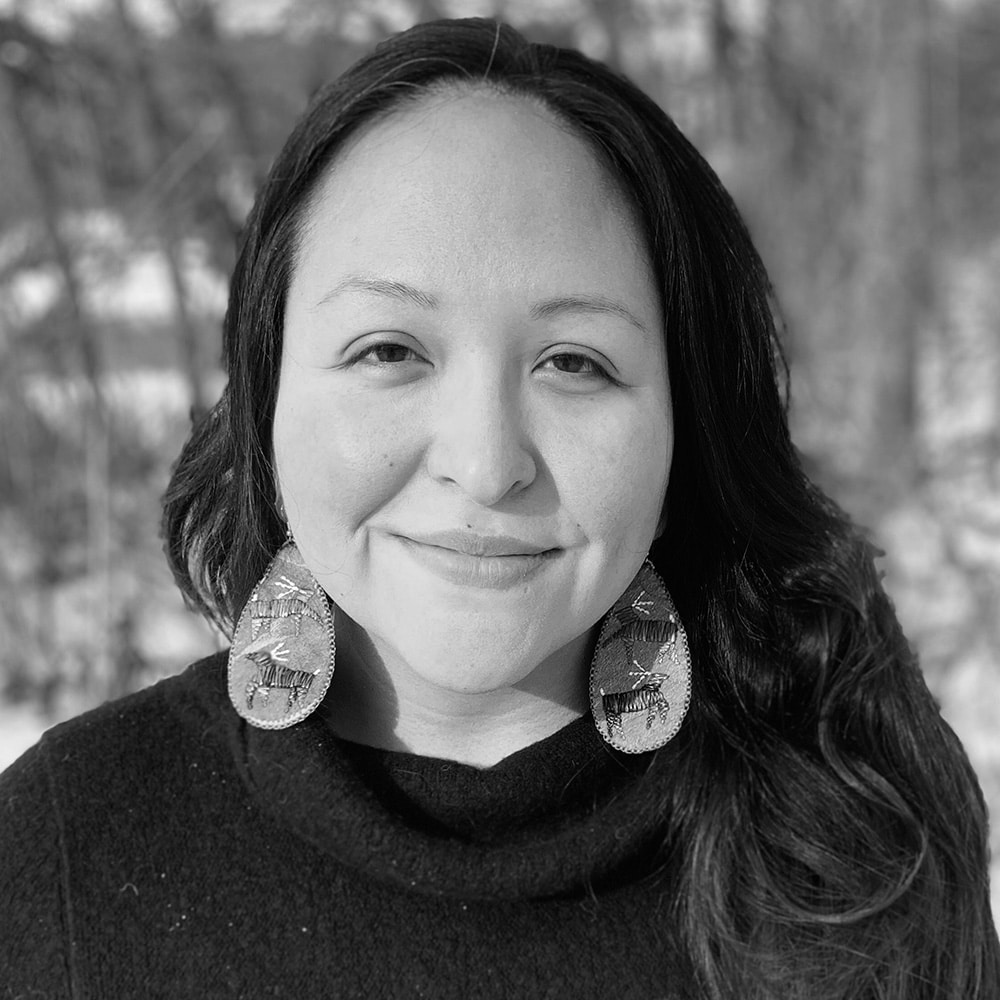 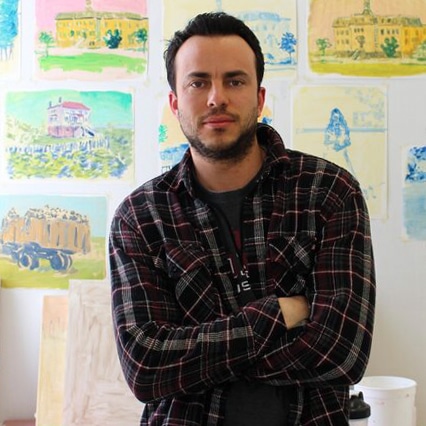 Manuel Ramirez is a member of the Otoe-Missouria Tribe. He is inspired by people, travel, and community. He is an alumnus of the Institute of American Indian Arts and the Smithsonian National Museum of the American Indian Artist Leadership Program. He enjoys working with monotypes and exploring works on paper.

Kendra Greendeer, a member of the Ho-Chunk Nation and descendant of the Red Cliff and Fond du Lac Bands of Lake Superior Ojibwe, is a PhD candidate in Art History with a focus on contemporary Native women artists, the transformation of spaces, and decolonial museum practices. Her recent curatorial and academic work encompasses Native American arts and the history of the United States. Most recently, Greendeer has curated and been the conservator for objects exhibited in Ho-Chunk Objects displayed in the permanent installation Mrs. M’s Cabinet at the Milwaukee Art Museum and in the co-curated exhibition Intersections: Indigenous Textiles of the Americas at the Ruth Davis Gallery on the University of Wisconsin-Madison campus. She is currently the Collections Manager for Little Eagle Arts Foundation in Wisconsin Dells, Wisconsin. Greendeer was a former Curatorial Resident at the Smithsonian’s National Museum of the American Indian. She earned her BFA in Museum Studies from the Institute of American Indian Arts in 2014 and her MA in Art and Museum Studies from Georgetown University in Washington, DC.

Her publications include “The Land Remembers Native Histories” in the Edge Effects digital magazine (November 21, 2019) and “Ho-Chunk Bandolier Bag” in the Otsego Institute Alumni Review (December 2017).

As a Council Member, Greendeer’s goals are to connect Museum Studies graduates to establish a network beyond the Southwest and create spaces for alumni artists to exhibit their work.

Moira Garcia is currently a graduate student in the Latin American Studies Program at the University of New Mexico (UNM). Her areas of focus are Art History and Indigenous Studies, specifically the pre-colonial Nahua visual culture of Central Mexico and the confluence of visual language, oral tradition, and verbal art. She also studies Nahuatl at UNM in partnership with the IDIEZ Language Revitalization Project based in Zacatecas, Mexico. While at UNM, Garcia has worked as a research and collections assistant at the Maxwell Museum of Anthropology with ethnology and archeology collections of the Brazilian Amazon and pre-Columbian ceramic figures from Mexico’s Gulf Coast cultures.

Garcia attended IAIA from 2009–2013 and received a BFA in Studio Arts with an emphasis in Printmaking. After graduation, she worked with IAIA’s Indigenous Liberal Studies Department to promote the exchange program with Mexico’s Universidad Intercultural del Estado de México (UIEM) and initiate the Spanish Language and Mexican Culture classes, which she taught as an adjunct professor from 2016–2018.

Garcia’s art practice is multi-disciplinary and combines scholarship, printmaking, painting, book arts, and installation in works that layer and express her Chicanx and multicultural identity, often through the symbols of Mesoamerican visual language. Although her studies at UNM don’t leave much time for making art, Garcia plans to rekindle her practice after graduation and continue to weave together her interests in language, visual culture, and Indigenous knowledge and expression.

As an Alumni Councilor, Garcia’s goal for 2021 is to establish an online alumni directory of artists, scholars, and creative professionals.

Leanne Campbell is an enrolled member of the Coeur d’Alene Tribe, or Schitsu’umsh—meaning “Those who were found here” or “The Discovered People.” Her lineage includes the Confederated Tribes of the Colville Reservation and the Nez Perce Tribe.

Campbell is a contemporary Columbia Plateau basket weaver and works with modern materials that include hemp twine, wool, and acrylic yarns, and raffia to create round root bags (also referred to as Plateau “Sally Bags”) and Columbia Plateau basket hats. She uses a time perfected technique of twining passed down from generation to generation from the beginning of time. She learned the art of twined basketry nearly twenty years ago. Her basketry features Columbia Plateau cultural heritage design work expressed in modern materials that speak volumes to the resiliency of our culture and traditional arts.

Campbell earned her BFA in Museum Studies with a minor in Studio Arts from the Institute of American Indian Arts in Santa Fe, New Mexico. She is an established and practicing artist and her work is collected and featured in museums. Campbell was selected as an Artist in Residency at IAIA, where she was recognized for her work in fiber arts. Campbell received a 2019 Esto Perpetua award from the Idaho State Historical Society, which is one of the highest awards given in the state for those who work to safeguard Idaho’s history and cultural heritage. Campbell is a member of the Board of Directors for the Museum of North Idaho.

Marcus Dunn is a visual artist of Tuscarora/Pee Dee and non-Native descent. His work has been exhibited at the SCAD Museum of Art in Savannah, Georgia, Gutstein Gallery in Savannah, Georgia and the Institute of American Indian Arts Museum of Contemporary Native Arts in Santa Fe, New Mexico. His work consists of small and large scale paintings concerning memory and cultural identity. He works in a variety of surfaces and sizes to make a montage of acrylic paintings. Before earning an MFA in Painting from the Savannah College of Art and Design, he earned a BFA in Studio Arts at the Institute of American Indian Arts. Referencing early images of American Indigenous boarding schools, Dunn makes paintings that explore cultural assimilation to reconstruct a historical narrative. The method of documentation used to create the visual record of cultural removal is reframed in his paintings. He currently lives and works in Laurinburg, North Carolina.

Dunn’s goals as a Council Member are to encourage fine arts graduates and students to find resources to show their work and seek opportunities such as residencies, scholarships, and grants for their field of study. He would also like to organize a virtual exhibition as well as an on-ground exhibition, consisting of small works that are ready to install.

Ryan Young is a Two Spirit Ojibwe multi-disciplinary artist from Lac du Flambeau, Wisconsin. They received their BFA in Studio Arts with a focus in Photography and a Certificate in Performing Arts from the Institute of American Indian Arts. Their senior show at IAIA focused on empowering Two Spirit people, using various mediums, including photography, silkscreen printing, projection, and mixed media.

Young’s first photography project, Indigeneity promoted representation of Indigenous students at the University of Wisconsin-Madison. This project led to a photo spread in Native Max Magazine and a position as Native Max Magazine Deputy Fashion Photography Editor. Young’s photography appeared in multiple issues and advertisements for JG Indie during New York’s Fashion Week. In 2018, they were announced as Eighth Generation’s designing artist for the Two Spirit wool blanket, which was released later that year.

As an IAIA Alumni Council Member, Young has three goals: to connect outgoing IAIA students with more resources for transitional job opportunities, fellowships, and internships in their field of study when they graduate; to increase networking opportunities between alumni and IAIA students; and to help increase awareness of local businesses and spaces for IAIA students/alumni to access art supplies, studio spaces, and more.

George Cramer is an enrolled descendant of the Karuk Tribe, an Indigenous people of California, located in the state’s northwestern corner. The Karuk Tribe is one of the largest tribes in California. Karuk means “upriver people,” or “upstream people.”

After close to forty years working in a variety of investigative roles, Cramer retired. Since then, he has devoted himself to writing. He writes historical and crime fiction. His debut novel, The Mona Lisa Sisters was released in 2020. His current work-in-progress chronicles four decades in the lives and crimes of brothers and the cops who pursue them.

Cramer earned his MFA in Creative Writing with a focus in Fiction from the Institute of American Indian Arts.

As an IAIA Alumni Council Member, Cramer’s primary goal is to open communication channels designed to promote the work and art of IAIA alumni, students, and staff. The IAIA Blog will focus on promoting the accomplishments and art of these three groups. Requests and suggestions for guests should be addressed to the attention of George at alumni.council@iaia.edu.