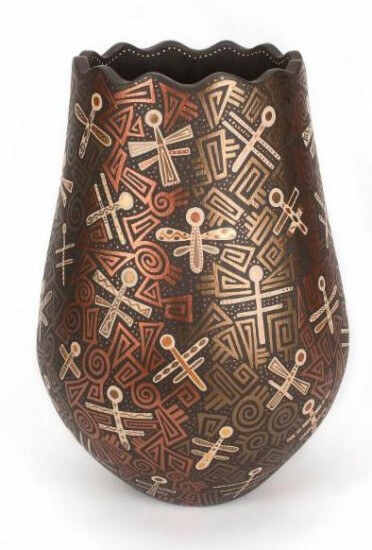 “Pueblo Luck” by Jody Naranjo and Glendora Fragua—Best of Show

Institute of American Indian Arts (IAIA) Alumni took home an extraordinary number of prizes at the recent Heard Museum Guild Indian Fair and Market, which took place March 5 and 6, 2016, at the Heard Museum in Phoenix, Arizona. The juried competition was held on March 4, 2016.

The Heard Museum Guild Indian Fair is a world-acclaimed cultural event that draws nearly 15,000 visitors and more than 600 of the nation’s most prominent and successful American Indian artists each year. The Heard Market welcomes traditional and cutting-edge contemporary artists as well as developing artists that may be selling their art alongside their more-established relatives. All proceeds support the museum’s mission of educating the public about the arts and lifeways of Indigenous peoples of the Americas with an emphasis on American Indian tribes and other cultures of the Southwest.

Nineteen IAIA Alumni collected twenty-nine awards in total which represented 22% of the awards given. Included in the list was the Best of Show winner IAIA Class of ’01 Alumna Jody Naranjo (Santa Clara Pueblo), who along with Glendora Fragua (Jemez Pueblo/Walatowa) took home the top prize for their collective piece “Pueblo Luck”—the pair also received the prize for Best of Class: Pottery. On her own, Naranjo was also awarded the Guild 60th Anniversary Theme Award: Contemporary Pottery, plus three other awards.

IAIA Alumni and Constituent Relations Manager Chee Brossy commenting on the the success of the IAIA Alumni, said “Our alumni have been successful in many fields of art, and the awards at the Heard Market this year have again shown their broad range.”

“Our alumni have been successful in many fields of art, and the awards at the Heard Market this year have again shown their broad range.”