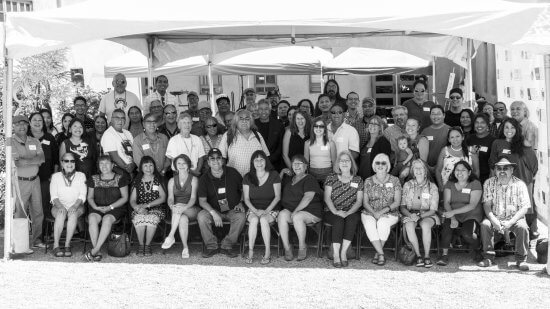 Tristan Ahtone ’06, Tahnee Growingthunder ’15, Heidi Brandow ’13, and Cynthia King ’73 were the four candidates who received the most votes and are the new IAIA Alumni Councilors. They join Linley Logan ’85, Kevin Locke ’13, and Rose Simpson ’07 on the seven-member Alumni Council. The Council convenes four regular meetings throughout the year. Each Councilor serves a term of two years.

Congratulations to the new Councilors and to all the candidates who participated! Below are the results with total votes for each candidate.

IAIA President Dr. Robert Martin wrote recently in a letter published in the Santa Fe New Mexican, “The Institute of American Indian Arts is the birthplace of contemporary Native art. It is through the commitment of the IAIA Foundation, individual donors, our alumni, the New Mexico congressional delegation, the Legislature and the Department of Higher Education that we have been successful in creating a revolutionary arts movement and a truly unique institution.” You helped us strengthen IAIA’s alumni voice by voting in the Alumni Council election—thank you.

Tristan Ahtone is a New Mexico-based journalist and member of the Kiowa Tribe of Oklahoma. Born in Arizona, raised across the United States, and educated at the Institute of American Indian Arts and the Columbia School of Journalism, he has worked as a door-to-door salesman, delivery driver, telemarketer, and busboy. Most recently, he served as contributing editor for High Country News Tribal Affairs desk. He also has reported for Al Jazeera America, PBS NewsHour, National Native News, Wyoming Public Radio, The Fronteras Desk and NPR. Ahtone’s stories have won multiple honors, including investigative awards from Public Radio News Directors Incorporated and the Gannett Foundation. He additionally was part of the Al Jazeera team that received a Delta Chi Award in 2015. Ahtone is vice president of the Native American Journalists Association and current fellow with the Nieman Foundation at Harvard.

The Institute of American Indian Arts is one of the most original, innovative and forward-looking educational centers in the world. The rich diversity, social complexity and financial demands of IAIA are all reflected in the Institute’s alumni. IAIA was founded to support the creative endeavors of Native American and Alaska Native people. The goal has been to empower through the expression and enhancement of artistic and cultural traditions. At this critical moment – when political rhetoric has grown more combative toward Indigenous people, public budgets shrink, and IAIA works to remain a vital part of Indian Country – the Alumni Council has the opportunity to aid IAIA’s mission by advocating with the Institute’s most precious resource: its former students.

I graduated from IAIA in 2006 and since then, I have worked as a journalist, feature writer, editor and executive director for dozens of organizations from Al Jazeera America and High Country News to Native America Calling. Since 2011 I have served in multiple capacities on the board of directors for the Native American Journalists Association. I am currently the outgoing NAJA vice president and a Nieman Fellow at Harvard.

As a potential new board member, my goal is to find new and unique ways to connect alumni with IAIA’s ongoing mission and leverage better communication between former students, current scholars, funders and policy makers. I look forward to working with that Alumni Council to build an even better, more effective and unified voice for the Institute of American Indian Arts.

Heidi K. Brandow is a multi-disciplinary artist whose work explores the evolving nature of identity. Cultural ties and connections to her Native Hawaiian and Navajo (Diné) communities, strongly inform Brandow’s understanding of self. Simultaneously, Brandow’s Indigenous heritage and the ways in which it informs Brandow’s perspective is continuously at odds with the western ideology that defines American culture. Brandow’s art practice is a device for navigating seemingly disparate cultures and social circumstances while discovering the connections we share through the exploration of our collective identity. A graduate of the Institute of American Indian Arts, Heidi K. Brandow has also studied design at the Harvard Graduate School of Design in Cambridge, Massachusetts and Istanbul Technical University in Istanbul, Turkey.

Informed by the enriching cultural and academic experiences I had as a student at IAIA, I am thoroughly aware of the significant impression IAIA made in my life. As an IAIA Alumni Council Member candidate, my goal is to strengthen our network of IAIA Alumni through consistent outreach, support, and diverse activities that encourage (re)connecting with fellow alum and also with current IAIA students, staff, faculty, and events. Moreover, I believe the IAIA Alumni network has the capacity to think broadly in approaching heightened fundraising goals that can be utilized as scholarships, and so forth. As a graduate of IAIA, I have always had a strong commitment to giving back to the community that has shaped a significant part of my identity. It with utmost sincerity that the IAIA Alumni Council consider my candidacy. Thank you!

Tahnee Growingthunder is a museologist who serves many roles in the public arts as a professional and advisor. Well versed in tribal relations, U.S. policy, NAGPRA, tribal historic preservation, collections care, protocol and metrics, she currently serves as the curator at the Mashantucket Pequot Museum and Research Center. Tahnee has recently completed her graduate studies entering into Ph.D. course work for Ethnic Studies. She holds an A.L.M. Masters in Liberal Arts with an emphasis in museology from Harvard University and a B.F.A. in Museum Studies from the Institute of American Indian Arts. Tahnee is a current American Indian Graduate Center Fellow and has completed an advisory fellowship for the University of Connecticut, Dodd Research Center UpStander Project for human rights. Her research cultivates dialogues for Contemporary American Indian and Ethnic Issues in the Arts and Literatures. Her work produces projects deeply rooted in relevant acad emic research that encourage conversations between both scholarly and non-scholarly audiences, and that present artistic practices as a communal experience rather than inaccessible objects.

To provide the local and national alumni, a means to connect with each other and to keep them updated on the current initiatives of the Institute of American Indian Arts (IAIA). I’d like to further assist in the recruitment of prospective students especially in the urban communities and to provide the IAIA community with knowledge of additional resources in the broader arts community.

I graduated from IAIA in 1973. I later attended the University of Colorado in Boulder, United States Army of which I was a Squad Leader, after that I attended Haskell Indian Junior College and the University of New Mexico in Albuquerque. I later graduated from Fond du Lac and Red Lake Nation colleges of which I earned high honors and am very proudly a life member of PHI THETA KAPPA. I have been published by the Native American Press for three years with my own column entitled KING’S MUSINGS. I am proud to be the grandmother of 4 boys and 4 girls.

I wish to be considered as an Alumni Council because of the way IAIA treated me and made me proud to express myself amongst my fellow natives. I pretty much grew up in Santa Fe and still feel I have family. You can count on me to keep the continuity and goals of IAIA going and their future and past students always treasured.

I came, I saw, but I sure as hell didn’t conquer. 3rd Generation IAIA alumnus, Class of ‘06. Contemporary Indigenous maker of Art. Father of two. Starting at University of Oklahoma in the School of Art and Art History as an MFA candidate. Cat lover. Graffiti and Street Art Advocate. Aries. Skoden.

There are plenty of Alumni with concerns, and I will advocate for them.