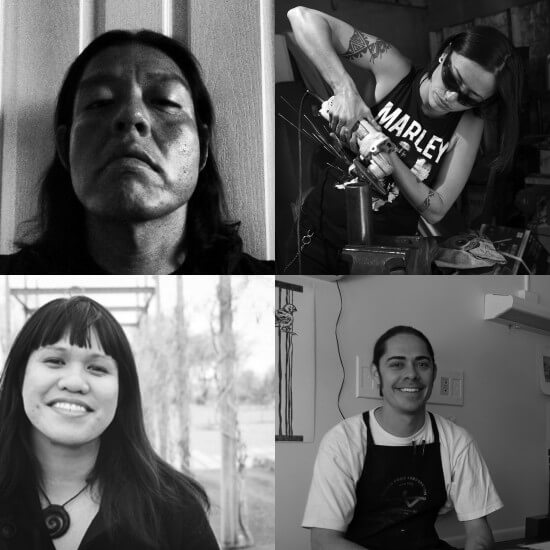 The IAIA Museum of Contemporary Native Arts (MoCNA) is pleased to announce its Social Engagement Art Residents for 2016. The MoCNA Social Engagement Art Residency is supported through the Artist Leadership Program for Museums and Cultural Institutions supported by the National Museum of the American Indian (NMAI), Smithsonian Institution. The museum is a catalyst for artists to generate community dialogue and dynamic experiences. The MoCNA Social Engagement Residency realizes socially engaged art projects that celebrate and engage the vibrant community that IAIA, MoCNA, and Santa Fe community have to offer for ten days in April and May of 2016.

Brandow is a painter, printmaker, and the mother of two boys. Brandow’s work is commonly filled with whimsical characters and monsters that are often combined with words of poetry, stories, and personal reflections. Hailing from a long line of Native Hawaiian singers, musicians and performers on her mother’s side and Diné storytellers and medicine people on her father’s side, she finds that her pursuit of an artistic career came naturally. Drawing inspiration from everyday life, Brandow’s work concerns discovering, defining, and redefining personal identity by questioning authority and deconstructing mainstream assumptions of Native American identity. Brandow’s work engages personal, cultural, and historical experiences while incorporating perspectives of critical theory. A graduate of the Institute of American Indian Arts (IAIA) in Santa Fe, New Mexico, Ms. Brandow has also studied design at the Harvard Graduate School of Design in Massachusetts and Istanbul Technical University in Turkey. She is currently represented by Zane Bennett Contemporary Art Gallery in New Mexico.

Lowe is a filmmaker from the Navajo Nation, and currently lives in Albuquerque, New Mexico. Lowe’s feature directorial debut 5th World premiered at the 2005 Sundance Film Festival, and screened at film festivals around the world. He received the New Mexico New Visions Contract Awardand Panavision Award for a short film he wrote and directed entitled Shimásáni. The film premiered at the 2009 Tribeca Film Festival and went on to screen at the 2010 Sundance Film Festival, as well as other festivals around the world garnering many awards and accolades along the way. A recipient of a Re:New Media Award, Lowe is an alumni of the Sundance Institute’s NativeLab, Sundance Producers Lab, and Screenwriters Writers Lab. Lowe recently completed his second feature film Chasing the Light and edited Sterlin Harjo’s Mekko. He produced Jason Asenap’s short film Rugged Guy, Sydney Freeland’s short film Hoverboard and Daniel Hyde’s Brousins and Manna. Currently he is writing his third feature.

Meders is a member of the Mechoopda Indian Tribe of Chico Rancheria, California, and lives in Phoenix, Arizona. Meders’ work focuses on altered perceptions of place, culture, and identity built on the assimilation and homogenization of indigenous peoples. Meders’ work reexamines varied documentations of Native Americans through printing processes which hold on to stereotypical ideas and the impact they have had on the culture of Native American people. Using book forms and prints as a symbol of western knowledge and the linear mind, Meders deploys them as a vehicle to challenge new perceptions of Native Americans. Meders has a BFA in painting with a minor in printmaking from Savannah College of Art and Design and a MFA in printmaking from Arizona State University. Working as Master Printmaker, Meders established WarBird Press, a fine art printmaking studio in 2011. Meders has exhibited his work at the IAIA Museum of Contemporary Native Arts, NM, the Corcoran Gallery of Art, Washington DC, the Heard Museum, AZ, and the Mesa Arts Center, AZ. His work is collected by major universities and other institutions both nationally and internationally. Currently Meders is an instructor at Arizona State University’s New College in Interdisciplinary Arts & Sciences.

Born in 1983, Simpson was raised in an arts and permaculture environment in Santa Clara Pueblo, NM. Simpson is a mixed-media artist focusing in ceramic sculpture, metal, fashion, painting, music, performance, installation, and most recently, custom cars. Residing on the Santa Clara reservation, she explores the many ways to deconstruct gender and culture-based stereotypes and social ideologies by wandering between ceramic or fashion or drawing or music studios, working on her classic cars and motorcycle in her shop, or pulling weeds and feeding animals on the farm. Simpson has shown her work both nationally and internationally, and is represented in museum collections including the Denver Art Museum, CO, Museum of Fine Arts, MA, The Clay Art Center, NY, Heard Museum, AZ, Pomona College Museum of Art, CA, and the Peabody Essex Museum, MA. She received her BFA in Studio Arts from the Institute of American Indian Arts (IAIA) in 2007. She graduated with an Honors MFA in ceramics from the Rhode Island School of Design in 2011. From 2012-2015 she attended Northern New Mexico College’s Automotive Science Program with a focus in Auto Body. Simpson is currently enrolled in IAIA’s Low Residency Creative Writing MFA program. Simpson serves on the Board of Directors of Flowering Tree Permaculture Institute and the New Mexico School for the Arts. She is represented by Chiaroscuro Contemporary Art Gallery in Santa Fe.