AboutVisit
Home About Board of Trustees 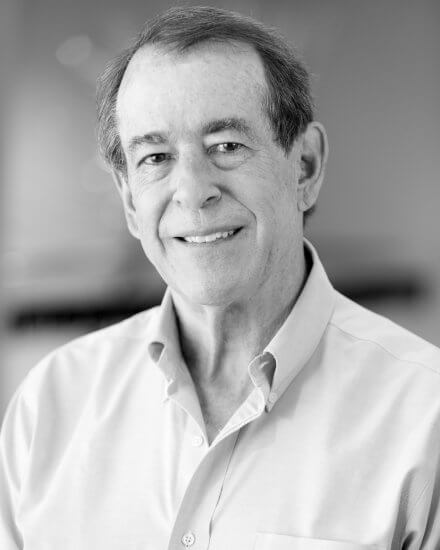 Loren Kieve (Cherokee) practices law in San Francisco. He is listed in “The Best Lawyers in America” and, for the eighteenth year in a row, as one of the top “Super Lawyers” in the San Francisco Bay Area. He formerly served as a member of the American Bar Association House of Delegates and has held ABA leadership positions since 1987. He is a director and past co-chair of the Lawyers’ Committee for Civil Rights of the Bay Area, and serves on the Board of Trustees of the national Lawyers’ Committee for Civil Rights. He previously was on the Board of Trustees of the State Bar of California. In 2017, the University of New Mexico honored him with its Bernard S. Rodey Award (to an individual who has “devoted an unusual amount of time in a leadership capacity and whose efforts have contributed significantly to the field of education”). He attended Stanford University and has law degrees from Oxford University and the University of New Mexico. 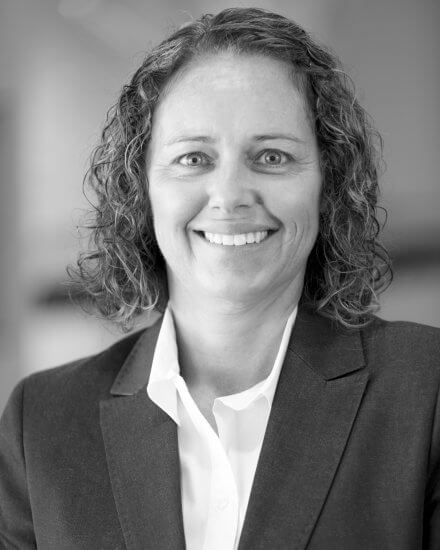 Ann Marie Downes (Winnebago Tribe of Nebraska) served in the U.S. Department of the Interior’s assistant secretary’s office of the Bureau of Indian Affairs (BIA). She is the former executive director of the Indian Legal Program at the Sandra Day O’Connor College of Law at Arizona State University, and a licensed attorney in California. She earned her JD from the ASU College of Law in 1994. 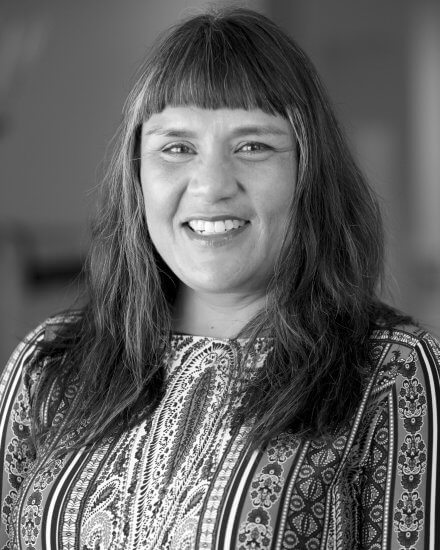 Bidtah Becker is a citizen of the Navajo Nation (NN) and is currently serving as an Associate Attorney for the Navajo Tribal Utility Authority. Ms. Becker’s career has focused on natural resources with an emphasis in water. In July 2019, Governor Lujan Grisham appointed Ms. Becker to serve on the New Mexico Interstate Stream Commission and she is also active on the Leadership Team for the Water and Tribes Initiative in the Colorado River Basin. Prior, she served as the Executive Director of the NN Division of Natural Resources (May 2015 to January 2019). From 2002 to 2015, Ms. Becker served in the Navajo Nation Department of Justice (NNDOJ) (2002 to 2015) where she worked as an attorney across three different units: Human Services and Government, Water Rights, and Natural Resources. Ms. Becker is happily married and Mom to 15-year-old Bahe and 11-year-old Tazbah. She lives with her family in Fort Defiance, Navajo Nation. 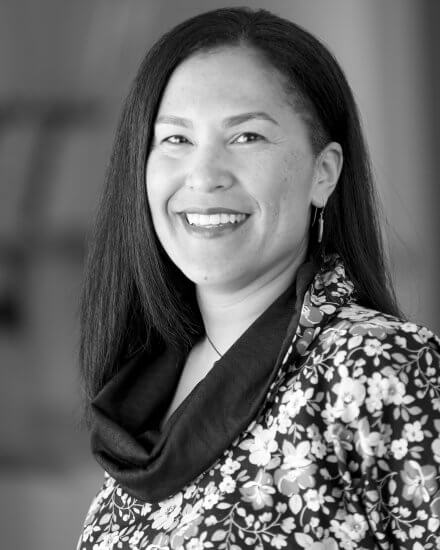 Princess Daazhraii Johnson (Neets’aii Gwich’in) is Partner and Consultant at Tsi’ baa Enterprises, a position she has held since 2014. Johnson served as Executive Director at the Gwich’in Steering Committee from 2011 to 2014 and as Alaska Director at the Indigenous Leadership Institute from 2009 to 2010. She was Production Manager of Native Voices at the Autry National Center from 2005 to 2006 and Producer at Lucaj Films, Inc. from 2004 to 2005. She was first appointed to the Board of Trustees of IAIA in 2014. Johnson received a BA from The George Washington University. 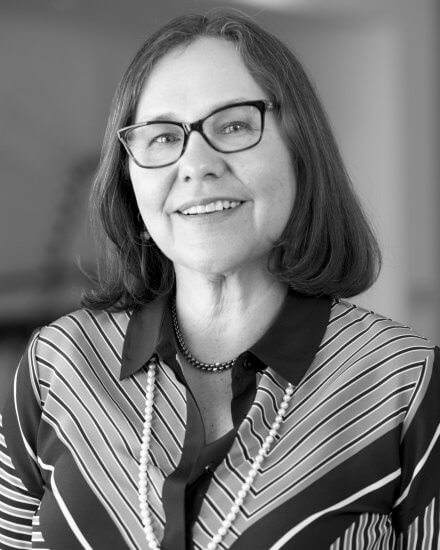 Beverly Morris (Aleut) is producer, director, and owner of Chain Reaction Productions. She has been associated with the IAIA since 1988 as a student, staff member, producer, and director. Morris received her BFA from Stephen F. Austin State. 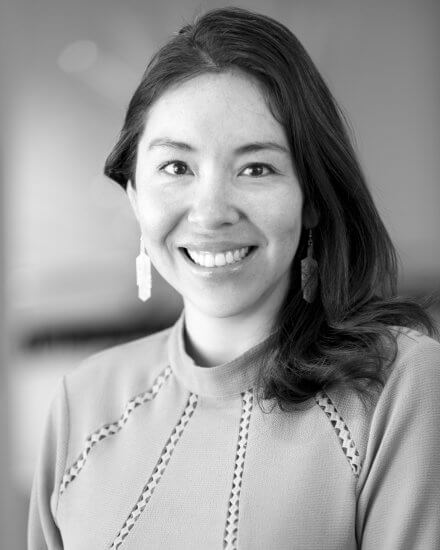 She received her BA in government from Georgetown University. 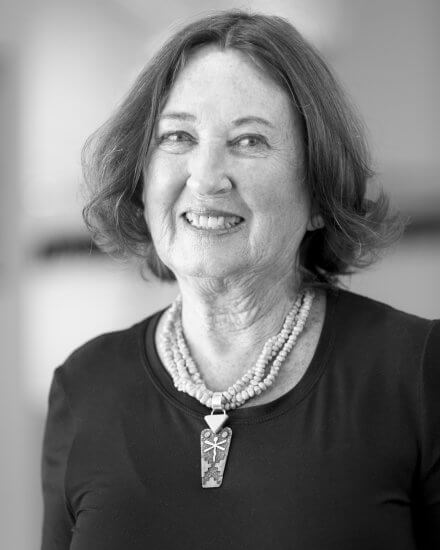 Barbara Jeanne Ells is a patron of the arts, with specific interest in the arts and crafts of the Southwest and of Native American cultures. Ells established and taught at multiple Head Start pre-schools elementary schools, and helped found and staff a safe house for abused women and children in Terre Haute, Indiana, including a day-care center. She was first appointed to the Board of Trustees of the IAIA in 2011. Ells has a BS in Early Childhood Education from Wheelock College. 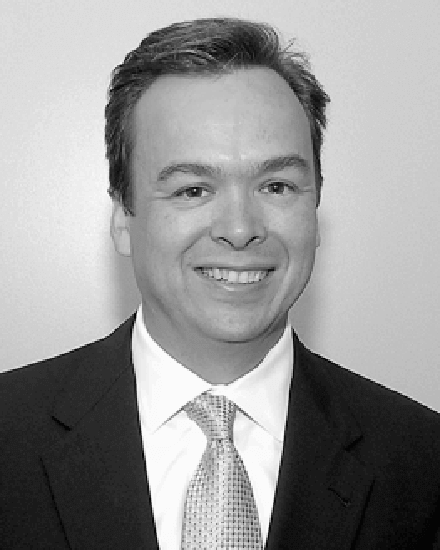 Lawrence Roberts (Oneida Nation) was appointed by President Obama to the Department of the Interior, Office of the Assistant Secretary, Indian Affairs in 2012, and ended his service on January 20, 2017. Roberts managed the Bureau of Indian Affairs, the Bureau of Indian Education and numerous offices that report to the Assistant Secretary’s Office. He worked closely with Tribes, other federal agencies, and the White House Council on Native American Affairs to foster tribal self-determination. Roberts graduated from the University of Wisconsin-Madison in 1992 with a double major in Political Science and Sociology and from the University of Wisconsin Law School in 1995. 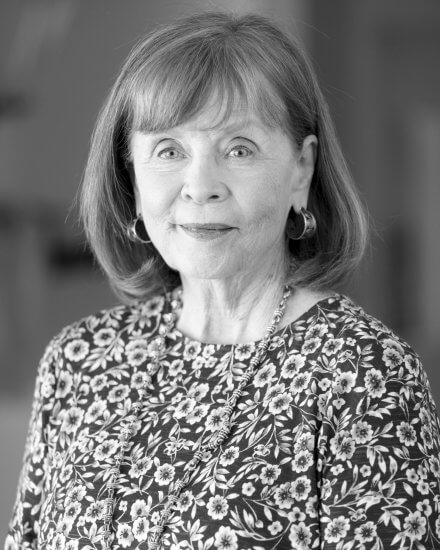 Brenda Kingery was raised in Oklahoma and is of Chickasaw and Anglo descent. Kingery is a contemporary artist and refers to her experiences living and working in Okinawa, Japan, Uganda, Africa, and Powwow’s of Oklahoma. Additional to her international exhibitions and representation, Kingery teaches textile and design workshops, encouraging women in Honduras, Mexico, and Uganda.

Kingery was appointed by the President of the United States to the Board of Trustees of IAIA in 2007, and in 2017 was named and celebrated as the Dynamic Woman of the Year by the Chickasaw Nation for her service as a role model and for her significant contributions to the Nation. 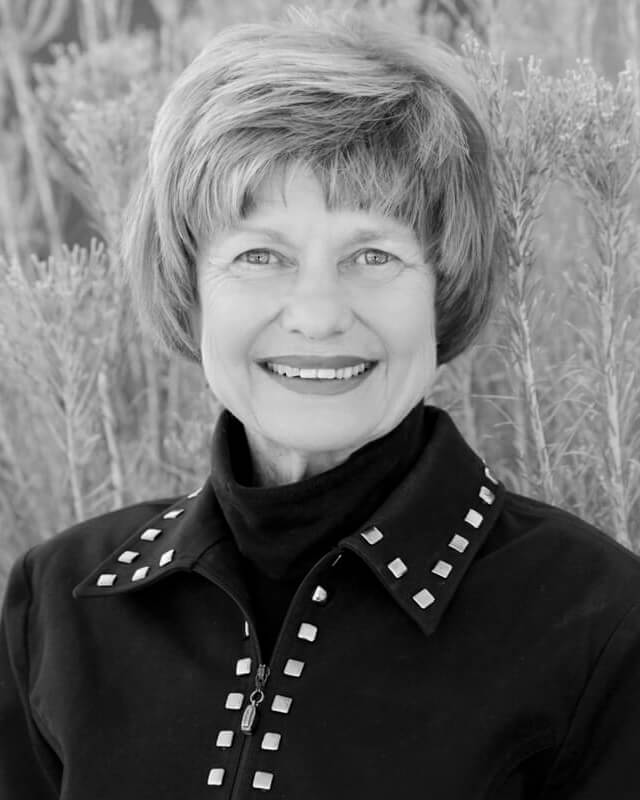 JoAnn Lynn Balzer, Santa Fe community leader and arts advocate, has had an extensive career in the arts, fundraising and non-profit management. She has long been a passionate supporter of the contemporary expressions of Native American arts and cultures and is dedicated to their promotion.

In 2010, President Barack Obama appointed her as a Trustee of the Institute of American Indian Arts (IAIA). In 2009 she was appointed by Governor Bill Richardson to serve as a New Mexico Arts Commissioner. She is a 2015 recipient of the Santa Fe Mayor’s Awards for Excellence in the Arts and was appointed Chair of the Santa Fe Arts Commission’s Cultural Affairs Working Group to help create, Culture Connects, the City’s first-ever cultural plan.

Balzer helped open two Santa Fe Museums—the IAIA Museum of Contemporary Native Arts (MoCNA) in 1991 and the Spanish Colonial Arts Museum in 2002. As a Trustee at IAIA, she and her husband named the Balzer Contemporary Edge Gallery on campus for students and the Balzer Alumni Gallery on campus for alumni to display their work. She is a Lensic Board member, an Honorary Director of the Ralph T. Coe Center for the Arts, and on the Advisory Boards of the International Folk Art Market and the Museum of New Mexico Foundation, where she co-founded Friends of Indian Art at the Museum of Indian Arts and Culture. She is a former board member of the Southwest Museum and the Autry National Center in Los Angeles.

She and her husband Bob sponsored the inaugural Indian Market EDGE to support SWAIA and its contemporary component, and are Founding Sponsors of the Innovation component of Santa Fe’s International Folk Art Market. 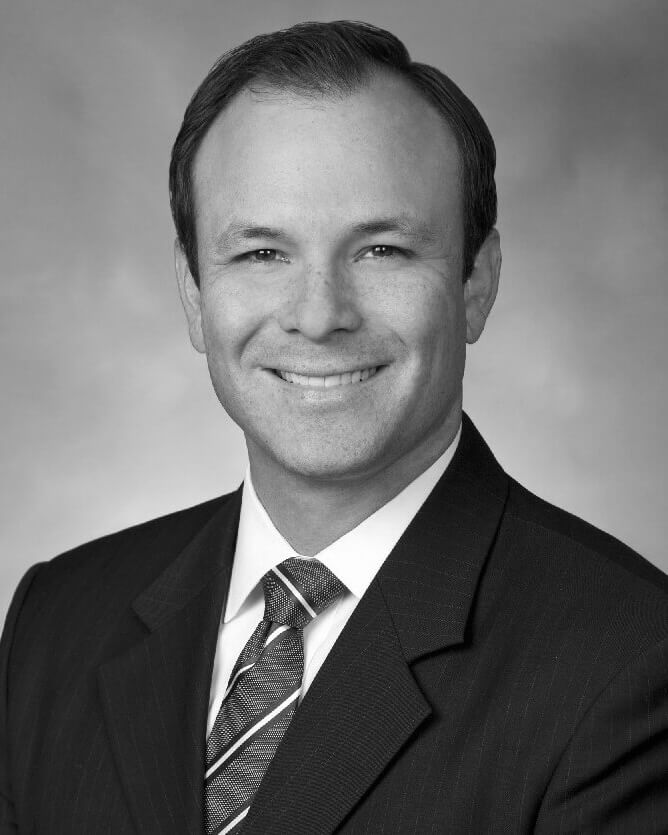 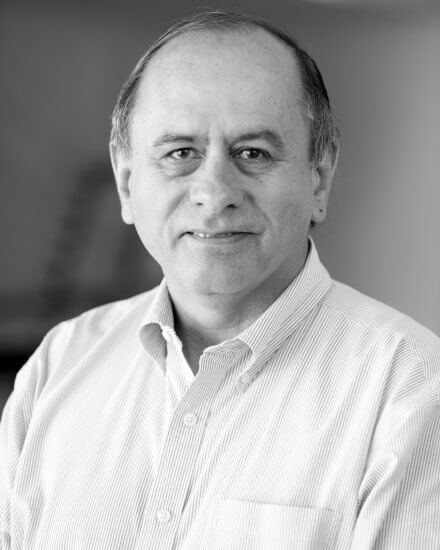 Dr. C. Matthew Snipp (Oklahoma Cherokee/Choctaw) is the Burnet C. and Mildred Finley Wohlford Professor of Humanities and Sciences at Stanford University and the Director of the Institute for Research in the Social Sciences’ Secure Data Center. Dr. Snipp received an MS and PhD from the University of Wisconsin-Madison.

The President of IAIA is a board member ex officio, as is the president of the IAIA Associated Student Government. 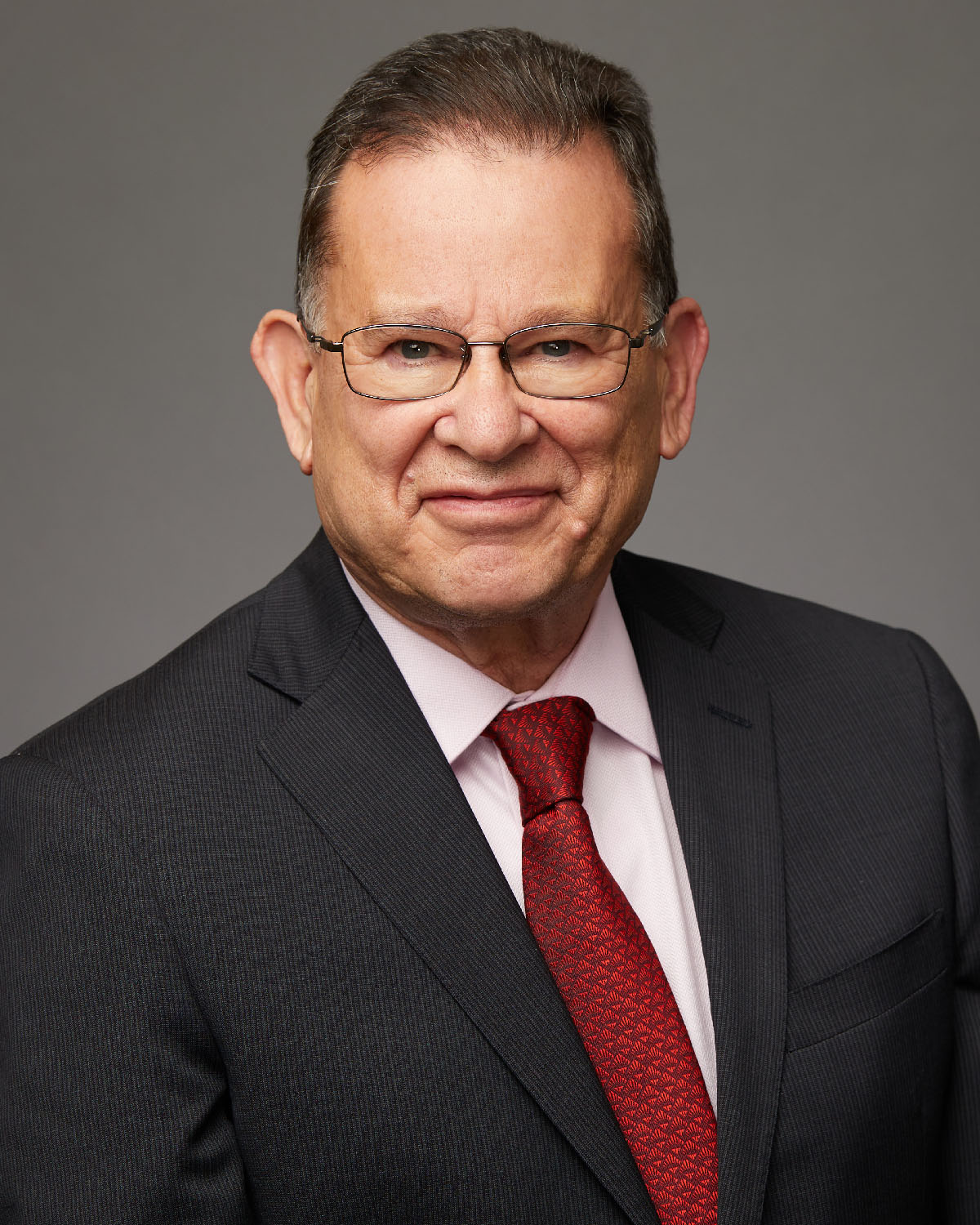 Dr. Robert Martin became President of the Institute of American Indian Arts (IAIA) on July 1, 2007. He has led the development of a comprehensive strategic plan and a campus facilities master plan resulting in academic program expansion, growth in student enrollment, construction of five new buildings on campus and the launch of a successful capital campaign. Prior to joining the IAIA community, Dr. Martin was the Associate Head for the American Indian Studies program at the University of Arizona. He also served as President of Southwestern Indian Polytechnic Institute in Albuquerque for eight years and president of Haskell Indian Nations University for ten years. Under his guidance, Haskell made the transition from junior college to a university offering baccalaureate programs. In addition, he served as the President of Tohono O’odham Community College (TOCC) in Sells, Arizona. During his tenure, TOCC achieved accreditation by the Higher Learning Commission and was designated as a 1994 Land Grant Institution by the U.S. Congress.

Dr. Martin is an enrolled member of the Cherokee Nation of Oklahoma and received his Doctorate in Educational Leadership from the University of Kansas and his bachelor’s and master’s degrees from Appalachian State University.

He currently serves on the boards of American Indian Higher Education Consortium, Lensic Performing Arts Center and the Higher Learning Commission—a regional accreditor for colleges and universities. Dr. Martin was awarded the Liberty Bell Award by the Douglas County (Kansas) Bar Association, bestowed on Law Day USA to recognize individual contributions to human rights. He also was awarded an honorary doctorate from Baker University and in 2010 he received the Tribal College President of the Year Award.