The IAIA Museum of Contemporary Native Arts (MoCNA) is proud to announce that The Andy Warhol Foundation for the Visual Arts has funded $50,000 to MoCNA for its 2017–2018 Social Engagement Art Residency. MoCNA is breaking new ground in the Native American art field in developing this practice and understanding its potential within Indian Country. Through this residency and its many other programs, the IAIA Museum of Contemporary Native Arts is acknowledged as a leader and an innovator in cutting-edge art practice. For the past three years, MoCNA’s Social Engagement Art Residency was funded by the Smithsonian’s National Museum of the American Indian (NMAI) through the Artist Leadership Program for Museums and Cultural Institutions. This partnership offered the flexibility to mold a program based on Native artist leadership that met the objectives of the Smithsonian while supporting MoCNA’s goals in terms of activating contemporary Native artist leadership, capacity and community building, and the Native American Fine Art Movement. IAIA Museum of Contemporary Native Arts Director Patsy Phillips (Cherokee) remarked, “We are delighted that MoCNA’s Social Engagement Art residency has been awarded $50,000 from The Andy Warhol Foundation for the Visual Arts. This grant recognizes the impact and significance of this program and allows us to continue to extend our reach to Native artists and to the field of contemporary art.”

The first round of residents will meet in Santa Fe from October 22–November 1, 2017.

“We are delighted that MoCNA’s Social Engagement Art residency has been awarded $50,000 from The Andy Warhol Foundation for the Visual Arts. This grant recognizes the impact and significance of this program and allows us to continue to extend our reach to Native artists and to the field of contemporary art.” 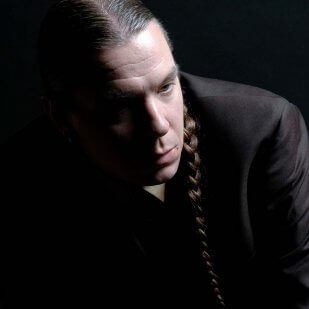 Praised and honored for “his ability to effectively infuse classical music with American Indian nationalism” (Washington Post). Tate, born in Norman, Oklahoma, is a citizen of the Chickasaw Nation and is dedicated to the development of American Indian classical composition. In 2016, Tate was selected as one of five composer-orchestra pairs, to participate in Music Alive, a national three-year residency program of the League of American Orchestras and New Music USA. As Composer-in-Residence with South Dakota Symphony Orchestra (SDSO), Tate will be participating in the third phase of SDSO’s Lakota Music Project. Commissioned works have been performed by the National Symphony Orchestra, San Francisco Symphony and Chorus, Detroit Symphony Orchestra, Minnesota Orchestra, South Dakota Symphony Orchestra, Winnipeg Symphony Orchestra, Canterbury Voices, Oklahoma City Philharmonic, Colorado Ballet, Santa Fe Chamber Music Festival, Philadelphia Classical Symphony and Santa Fe Desert Chorale. Tate is a three-time commissioned recipient from the American Composers Forum and he received a 2011 Emmy Award for his work on the Oklahoma Educational Television Authority documentary, The Science of Composing. Tate earned his Bachelor’s Degree in Piano Performance from Northwestern University and his Master’s Degree in Piano Performance and Composition from The Cleveland Institute of Music, from whom he received the 2006 Alumni Achievement Award. In 2008, he was appointed Creativity Ambassador for the State of Oklahoma. Works available are Iholba’ (The Vision), for Solo Flute, Orchestra and Chorus and Tracing Mississippi, Concerto for Flute and Orchestra, recorded by the San Francisco Symphony Orchestra and Chorus, on the Grammy Award winning label Azica Records. Tate’s recent commissions include his Muscogee Hymn Suite for Tulsa Symphony Orchestra, his Ponca Indian Cantata for Hildegard Center for the Arts and his Chickasaw oratorio, Misha’ Sipokni’ (The Old Ground), for Canterbury Voices and Oklahoma City Philharmonic. Tate has held Composer-in-Residence roles for New Music USA Music Alive, Oklahoma City’s NewView Summer Academy, Oklahoma Medical Research Foundation, Joyce Foundation/American Composers Forum and Grand Canyon Music Festival Native American Composer Apprentice Project. Tate was the founding composition instructor for the Chickasaw Summer Arts Academy and taught composition to American Indian high school students in Minneapolis, MN and Native students in Toronto, Ontario.

Rhiana Yazzie is a Navajo playwright based in Minnesota. She is a 2016–2017 Playwrights’ Center McKnight Fellow, a two-time Playwrights’ Center Jerome Fellow, Playwrights’ Center Core Member, William Inge Center playwright-in-residence, Resident at the biennial Bonderman National Theatre for Youth Symposium and the Kennedy Center’s New Visions/New Voices. She created New Native Theatre in 2009, a company based in Minnesota. Productions include Native Man the Musical, and 2012: The Musical! Her play Chile Pod, commissioned by La Jolla Playhouse, toured to 18,000 youth in Southern California schools and communities. She is the three-time winner of the Native Radio Theatre annual new play contest. Her radio play The Best Place to Grow Pumpkins received an Honorable Mention at the ImagiNative Film Festival in Toronto. Other plays include Asdzani Shash: The Woman Who Turned into a Bear, The Long Flight (translated into Spanish and presented at the 30th World Congress of the International Theatre Institute, UNESCO in Tampico, Tamaulipas, Mexico), This Land Had Seen War Before (published in a 2008 anthology), and Birthed from Scorched Hearts: Women Respond to War.