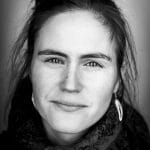 Anna Hoover (Norwegian, Unangax̂) is a writer, artist, and filmmaker. She produces documentary, fiction, and art films from her home state of Alaska. She trained in Printmaking at the University of Washington and participates in print exchanges when the opportunity arises.

Inspired by the natural world, Hoover’s mixed media work expresses observed nuance in shade and hue, interpreting the visual poetry of Mother Nature’s garden. Her films share honest Alaskan stories to audiences around the world. Hoover has received support in her career from the Alaska Humanities Forum, the Rasmuson Foundation, the Institute of American Indian Arts, the International Sami Film Institute, WGBH/PBS, as well as having screened at imagineNATIVE, Berlinale Native, Northwest Filmmakers, and the IAIA Museum of Contemporary Native Arts (MoCNA). A private airplane pilot and commercial salmon fisher, Hover lives for a challenge and does not shy away from adventure.
Partially funded by the City of Santa Fe Arts Commission and the 1% Lodgers Tax.