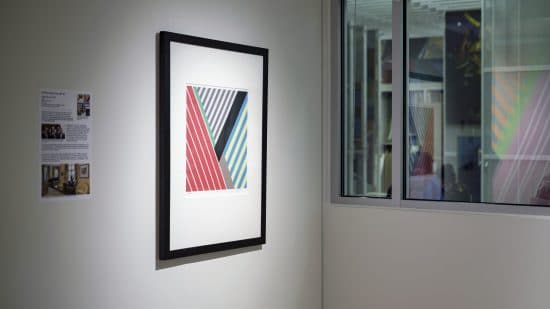 In Loving Memory Exhibition in the Collection Gallery

This exhibition, located in the Robert and Barbara Ells Family Collection Gallery on the IAIA Campus, honors the art of esteemed IAIA Alumnus and Associate Professor Lyndon Jeffery Kahmakoatayo “Jeff Kahm” (Plains Cree, 1968–2021). The works in the In Loving Memory: Lyndon Jeffery Kahmakoatayo “Jeff Kahm” exhibition include several prints created when Kahm was a student at IAIA (1990–1992), an editioned print created for the US Art In Embassies program, and a major gift by Kahm in 2012 at the close of Vernacular, his solo exhibition at the IAIA Museum of Contemporary Native Arts (MoCNA). This exhibition opened on May 3, 2021.

A memorial was held for Kahm on the IAIA campus on Wednesday, March 31, at 11 am (MDT).

Lyndon Jeffery Kahmakoatayo “Jeff Kahm” (Plains Cree, 1968–2021), born in Edmonton, Alberta, Canada, attended the Institute of American Indian Arts (IAIA) in 1990 to study painting and photography. Soon after, he was awarded a painting scholarship to attend the Kansas City Art Institute, earning a BFA in 1994. He continued with graduate studies at the University of Alberta, earning an MFA in 1997.

In 2002, Kahm returned to New Mexico, a land that he grew to love and called home. He became a permanent resident in 2003 and soon began teaching at the IAIA as a visiting faculty member. Kahm was an associate professor at IAIA, where he taught studio art courses at the intermediate and advanced levels.

His landmark exhibitions at the IAIA Museum of Contemporary Native Arts (MoCNA) in Santa Fe, New Mexico (2012), Urban Shaman Contemporary Aboriginal Art in Winnipeg, Manitoba (2013), and Chiaroscuro Contemporary Art in Santa Fe (2016) highlighted his work. It was a striking series of small works on paper and panels and an impressive collection of large-scale paintings on canvas—work he described as “rooted in Indigenous abstraction and Modernist aesthetics.” His work continues to reach a wider audience through various invitational and group shows nationally and internationally.