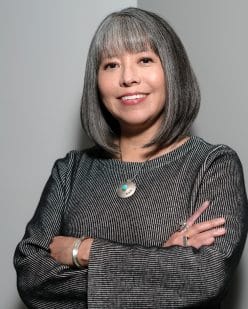 The United States Senate voted on June 22, 2010, to confirm the nomination of Dr. Chavez Lamar to serve on the IAIA Board of Trustees. Dr. Cynthia Chavez Lamar served as an IAIA Trustee from 2011–2017 and helped advance IAIA’s mission and initiatives while working closely with her colleagues.

IAIA Board of Trustees’ Chair Loren Kieve (Cherokee) remarked, “This is a spectacular choice. Cynthia was a great asset to IAIA when she served as a member of our board of trustees. The Smithsonian is fortunate to have someone with her talents and insights into Native American art and culture. We at IAIA look forward to continuing our close collaboration with NMAI under Cynthia’s leadership.”

In NMAI’s press release, Dr. Chavez Lamar said, “I am excited to begin my tenure as the director of NMAI, and I am looking forward to leading and working with the museum’s experienced and dedicated staff. Together, we will leverage the museum’s reputation to support shared initiatives with partners in the US and around the world to amplify Indigenous knowledge and perspectives, all in the interest of further informing the American public and international audiences of the beauty, tenacity, and richness of Indigenous cultures, arts, and histories.” Dr. Chavez Lamar oversees the museum’s collections, facilities, safety, and information technology departments. According to the Smithsonian’s press release, she leads efforts to ensure effective management and care for the museum’s collection, composed of more than one million objects and photographs and more than 500,000 digitized images, films, and other media documenting Native communities, events, and organizations.

About the IAIA Board of Trustees

In 1986 the United States Congress established the Institute of American Indian and Alaska Native Culture and Arts Development (IAIA), making IAIA one of only three Congressionally chartered colleges. The President of the United States appoints IAIA trustees. The President of IAIA is a board member ex officio, as is the president of the IAIA Associated Student Government (ASG). IAIA is under the direction and control of the Board of Trustees, which has ultimate authority to make and approve policy, appoint the President of IAIA, and make rules and procedures as it deems necessary.

Learn more about IAIA Trustees and read their biographies.