In its ongoing mission “to empower creativity and leadership in Indigenous Arts and cultures through higher education, lifelong learning, and outreach,” the Institute of American Indian Arts (IAIA) is pleased to announce the formation of a new partnership with the California Institute of the Arts (CalArts). The partnership will allow the schools to collaborate and influence each other through student and faculty exchanges.

“CalArts is at the beginning of a process of Indigenization, and we’re looking to IAIA for how to best approach that,” says Dr. Chad Hamill (Spokan), CalArts President’s Fellow for Indigenous Arts and Expression. While IAIA will provide guidance to CalArts in its Indigenization efforts, CalArts, located in the Greater Los Angeles area, will offer IAIA students accessibility to cutting-edge and experimental art-making technologies, and future job opportunities. The school has deep ties to animation and film studios, theater and music industries, and experience-design companies.

“As a school that has been in existence for sixty years, IAIA has built connections with many institutions interested in Indigenous arts and artists. IAIA has long had informal community connections with CalArts through our students, alumni, and faculty. Through this partnership, we will build a reciprocal and collaborative relationship for the future.”
Felipe Colón (Laguna Pueblo)

CalArts is a nonprofit interdisciplinary art institute offering undergraduate and graduate degrees through numerous programs of study including traditional and digital media arts, filmmaking, performance, and music. Its mission is “to promote a community of artists that, through artistic practice, seeks to transform themselves, each other, and the world.” As CalArts enters its fifty-first year, the school seeks to diversify its student body, staff, faculty, and curriculum by building collaborations and sharing resources with Indigenous artists, educators, nations, and institutions like IAIA, the only college in the world dedicated to the study of contemporary Native American and Alaska Native arts.

CalArts President and Chief Executive Officer, Ravi Rajan believes the missions of both schools are complementary and their shared goals can form a strong foundation for mutual growth and exchange. “IAIA’s mission is something that’s very, very important,” he says. “It stands to amplify Indigenous voices within the space of arts and culture through contemporary practice, and that’s conspicuously absent in the space of contemporary culture in the United States.” 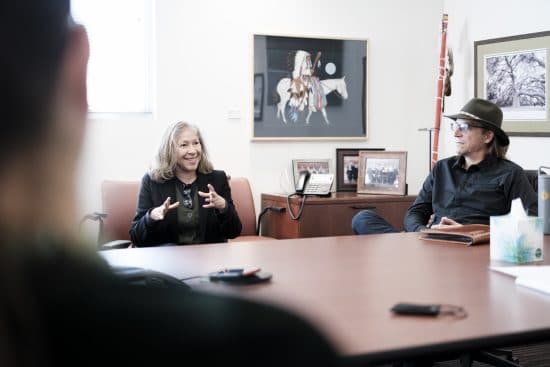 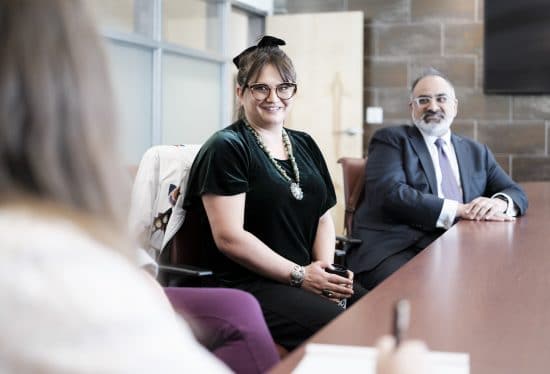 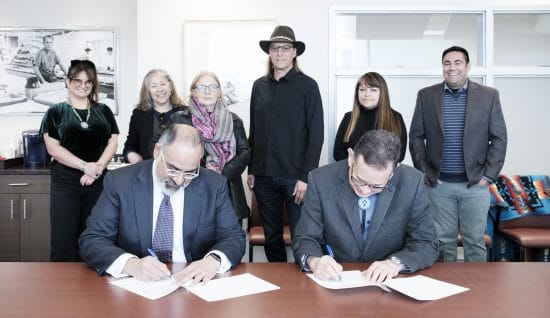 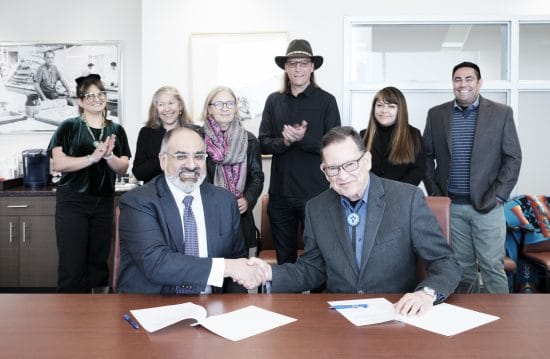 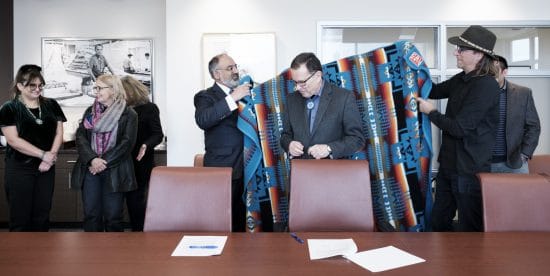 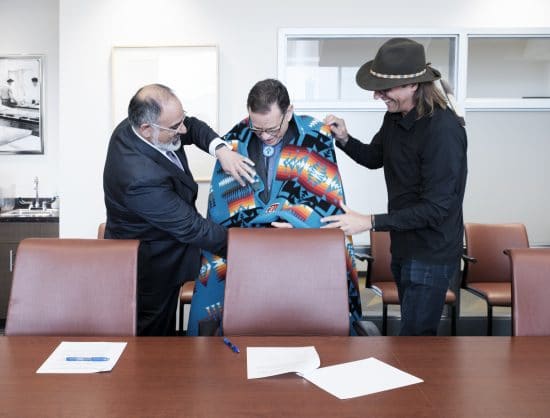 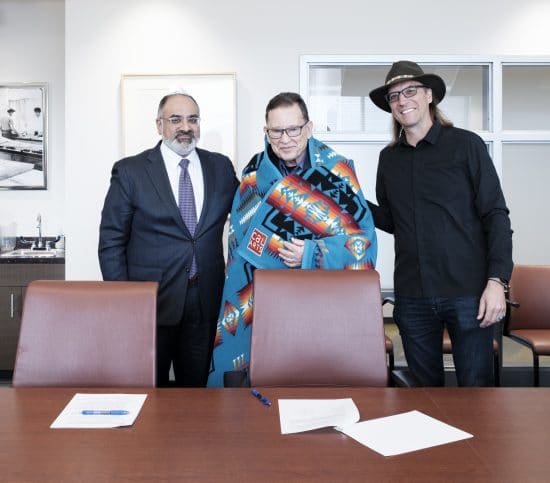 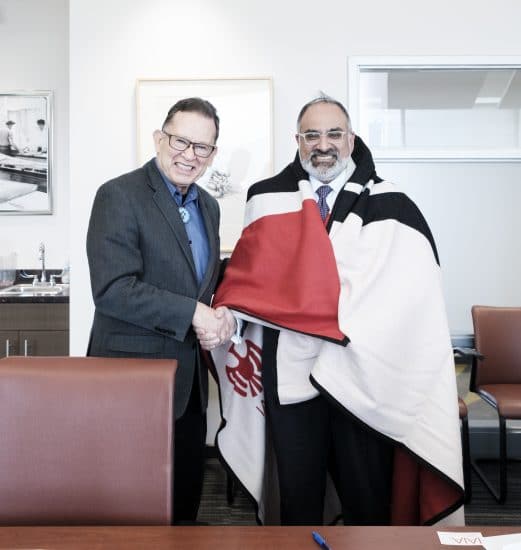 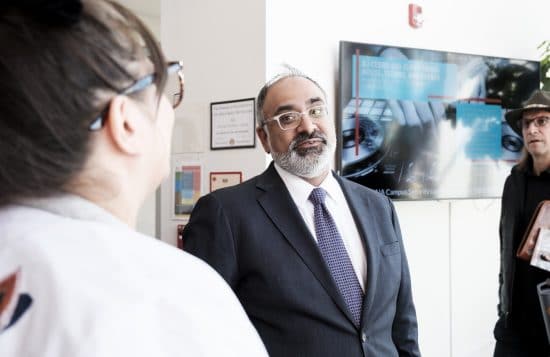 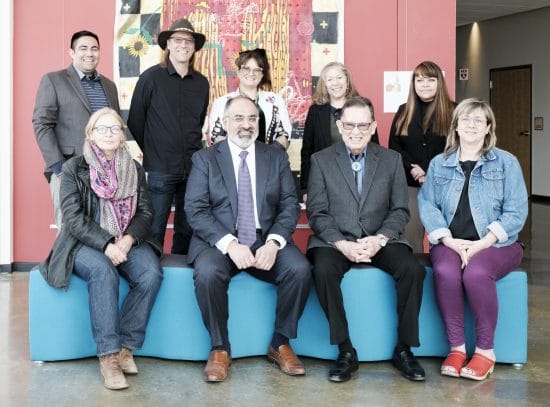 “As an Indigenous institution, we believe that Indigenous ideas and values are not exclusively Indigenous,” says Felipe Colón. “Indigenous people have a lot to teach the world. By exposing more of who we are to the students at CalArts, they will learn Indigenous values, practices, and in some cases, techniques that they can impart in their work, their practice, and their consciousness as artists.” 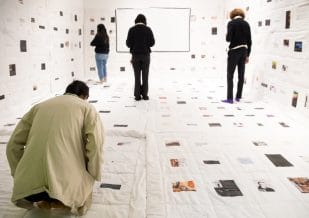 Abigail Severance, Interim Dean of the School of Film and Video, praised IAIA President Dr. Robert Martin (Cherokee) for ensuring that student experiences and opportunities were at the forefront of the partnership’s framework. “Student exchanges would be of strong interest, and that seems natural and organic in the way that we’ve already worked with other schools.”

Eve LaFountain (Chippewa), CalArts Assistant Director of Admissions for the School of Film and Video, grew up in Santa Fe and attended CalArts. She noted her excitement about the prospects for the partnership moving forward. “On a personal level, it’s exciting to see these things come together. Everything I knew about contemporary art before I left home came from IAIA.” LaFountain has family who went to IAIA, and she participated in special programs here as an undergraduate. She says the one-on-one conversations about IAIA she has had with her CalArts peers have resulted in enriching exchanges, and she looks forward to seeing what opportunities emerge as a result of the IAIA-CalArts partnership. “I’m just really excited to be part of it.”

For now, the agreement is in its exploratory stages. Presidents Rajan and Martin agree that the structure of the partnership should form organically in response to the needs and desires of both communities. “If we force some issue here, it isn’t likely to last,” says Rajan. “This is something we want to establish and make sure it stays for a long time.”

About the Institute of American Indian Arts (IAIA)

The Institute of American Indian Arts (IAIA) is the only college in the world dedicated to the study of contemporary Native American and Alaska Native arts. IAIA offers undergraduate degrees in Cinematic Arts and Technology, Creative Writing, Indigenous Liberal Studies, Museum Studies, Performing Arts, and Studio Arts; graduate degrees in Creative Writing, Studio Arts, and Cultural Administration; and certificates in Broadcast Journalism, Business and Entrepreneurship, Museum Studies, and Native American Art History. The college serves approximately 500 full-time equivalent (FTE) Native and non-Native American students from around the globe, representing nearly a hundred federally recognized tribes. Named one of the top art institutions by UNESCO and the International Association of Art, IAIA is among the leading art institutes in our nation and is accredited by the Higher Learning Commission (HLC).

About the California Institute of the Arts (CalArts)

California Institute of the Arts (CalArts) has set the pace for educating professional artists since 1970. Offering rigorous undergraduate and graduate degree programs through six schools—Art, Critical Studies, Dance, Film/Video, Music, and Theater—CalArts has championed creative excellence, critical reflection, and the development of new forms and expressions. As successive generations of faculty and alumni have helped shape the landscape of contemporary arts, the Institute, first envisioned by Walt Disney, encompasses a vibrant, eclectic community with global reach, inviting experimentation, independent inquiry, and active collaboration and exchange among artists, artistic disciplines, and cultural traditions.

Want to visit the Institute of American Indian Arts (IAIA) campus, but can’t travel right now? Want a guided tour during a time when Admissions staff are unavailable? Well, you are in luck! Because now you can take a tour of the IAIA Campus from the comfort of your home. With audio narration and written descriptions of each location, it’s like having a guide with you as you virtually move through our stunning 140-acre campus on the new virtual tour, available through Google Maps technology in partnership with Mass Interact, the leader in interactive virtual tour experiences.

The crisp, vibrant immersive images provide a 360° view so you can look all around each building, classroom, and studio. Zoom in and out to get a closer look and quickly travel through our halls and from building to building with the easy-to-use navigation arrows, or by clicking through the navigation bar on the left-hand side. The virtual tour is quick and easy to use on a mobile device or a desktop.

Whether you want to take a look at the Land-Grant Garden, sneak peek the IAIA Museum of Contemporary Arts (MoCNA) Collections, or even take a walk through our IAIA Library stacks, look no further than the device you’re reading from now! The tour provides information about our campus, and the immersive images alone can be viewed directly from Google Maps. Virtually visit the IAIA Campus today and see a part of what we have to offer. 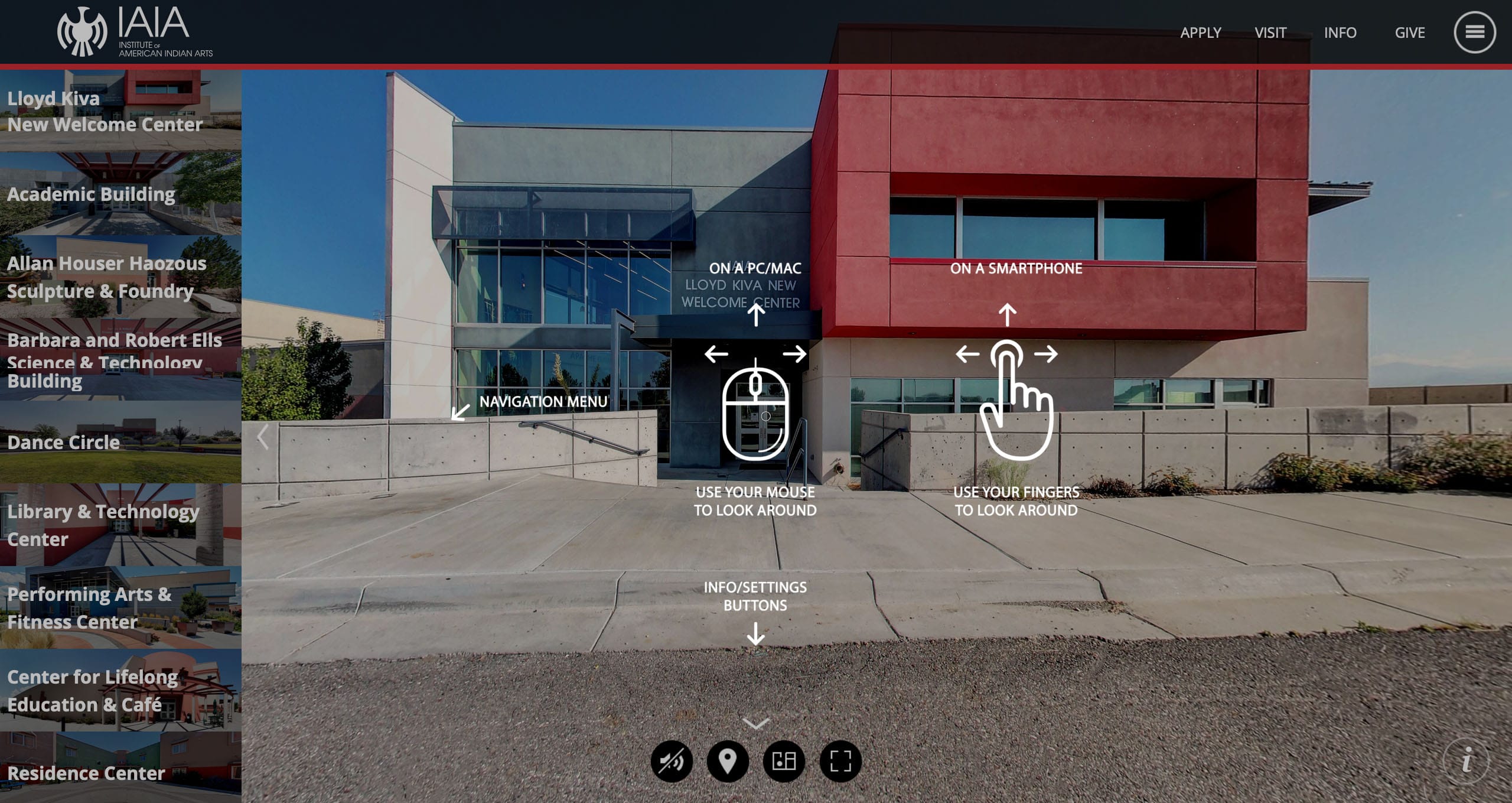