When it comes to the fields of science, technology, engineering, and mathematics (STEM), one aspect that is perhaps not addressed enough is the exclusiveness of the fields. Traditionally, STEM fields are constructed, taught, and learned from Western perspectives, methodologies, and pedagogies, which can often inhibit who enters STEM fields. As part of its mission and vision, the Institute of American Indian Arts (IAIA) integrates culturally based curricula into its programming. While many science classes at IAIA have long incorporated Indigenous knowledge systems into their curricula, until recently, the mathematics curriculum has largely been taught with mainstream pedagogies. Recently, IAIA’s mathematics courses have been undergoing a revamp to incorporate an Indigenous mathematics curriculum.

The new Indigenous mathematics curriculum will not only change the accessibility of math, and thus other STEM courses, but also acknowledges the STEM backgrounds of Indigenous Peoples. “Indigenous Peoples had a whole taxonomy language way before colonizers made the Latin-based taxonomy system we use today,” says IAIA Assistant Professor of Mathematics Andrea Otero, MEd. “That gets disregarded in Western education systems. Part of decolonizing curricula means giving credit to the voice. An Indigenous math curriculum must include the influences and legacies of Native leaders, activists, artists, and astronomers from the past and, more importantly, presently living.” 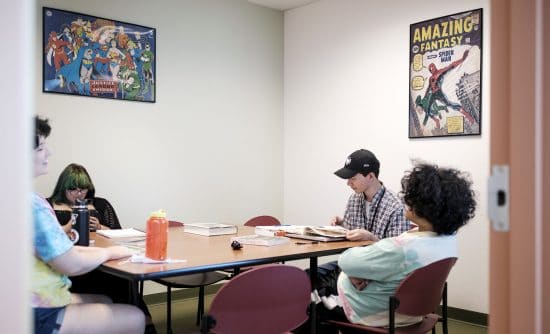 Part of this, especially for non-Indigenous teachers using the curriculum, means bringing more voices into the classroom. “As a professor, it’s not all about you,” says Otero, discussing how part of her teaching involves bringing in Indigenous artists and leaders to discuss how they use math in their art and lives. “Outside voices can be a lot more powerful than the students only hearing me. The more you teach, the more you learn to facilitate through the intelligence of others.”

Other important aspects of the Indigenous mathematics curriculum include recognizing and celebrating the many different learning styles and backgrounds of students, keeping classes organic and fluid to keep the information relevant and applicable, and more hands-on learning, as well as hands-on assessment. Otero explains that often students understand the material but are not naturally attuned to Western-based pedagogies and assessments, and because of this, their talents and intelligence may go undetected. With an Indigenous mathematics curriculum, students will have the option of demonstrating their understanding of mathematics in a variety of ways, which includes applying their knowledge to hands-on endeavors, such as building small structures and/or works of art rather than solely writing out mathematic equations without context.

Decolonizing assessment will also allow instructors to have a clearer idea of what their students actually understand. Part of this also involves the placement diagnostic given to incoming IAIA students to determine course placement. For the past two semesters, Otero has designed the in-house math diagnostic and has added a wider variety of questions to it, including more visuals and graphs, as well as qualitative problems, which require students to express their knowledge of mathematics verbally rather than numerically. Otero says this new diagnostic has proven successful in more accurately placing students into the correct math class, as it provides more room for students to demonstrate their skills.

The integration of an Indigenous mathematics curriculum at IAIA has, in many ways, been under development since 2018 when President Dr. Robert Martin (Cherokee) proposed that IAIA’s mathematics courses find a more effective curriculum for the Developmental Education courses. IAIA began using a curriculum designed by Carnegie Mellon and Otero was the first mathematics instructor in New Mexico to use Quantway—a style of mathematics that uses contextualized real-world data, rather than numerical problems, and collaborative learning. For the past three years, Otero has taught Quantitative Reasoning, altering Carnegie Mellon’s curriculum as necessary to make it more applicable and relevant for IAIA students. Many other Tribal Colleges and Universities (TCUs) have also implemented Carnegie Mellon’s Quantway, as well as other Indigenous-based pedagogies in their math curricula. In attending various math conventions around the country, Otero has had the opportunity to learn from mathematics instructors at other TCUs as well as share her experiences.

IAIA’s Indigenous Liberal Studies department has also played a major role in creating this curriculum. Through these collaborative efforts, the Indigenous mathematics curriculum continues to develop. While many changes have already been implemented, in a lot of ways, an Indigenous mathematics curriculum will be something that is always in the stages of development by the sheer nature of its foundation as fluid, contemporary, and relevant. As Otero says, “Educators need to continue to be educated. It’s not about being a master, it’s about listening—if you’re listening, you’re learning.”