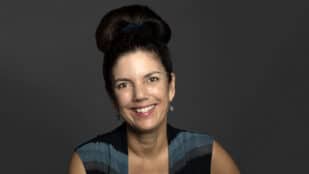 Two outstanding students in the Institute of American Indian Arts’ Low Residency MFA in Creative Writing (MFACW) program have been awarded scholarships of $10,000 each from Warner Bros. Discovery Access. The Warner Bros. Discovery Access Scholarship is annually awarded to second-year Indigenous MFACW students with a concentration in Screenwriting. The scholarship committee recognized Cressandra Thibodeaux (Sault Ste. Marie Tribe of Chippewa Indians) and Sabrina Saleha (Diné) for their promising TV pilot screenplays and commitment to advancing visibility, opportunities, and intellectual property rights for Indigenous people in the television and film industries. As Warner Bros. Discovery Access Scholarship winners, these talented women will use their award funds to reach their educational and professional goals as screenwriters.

Cressandra Thibodeaux has already experienced great success as a filmmaker, playwright, and photojournalist. She earned an MFA in Directing from Columbia University’s film program and received many awards, including two MacDowell Colony Fellowships and a Rockefeller grant. Thibodeaux studied documentary theater at the Tectonic Theater Project in New York City, where she started preliminary work on her critically-acclaimed play, Dialogues on Grace. She has been the director and editor of several award-winning documentary films. Additionally, Thibodeaux is the founder of the artist-run theater 14 Pews and production company Bechdel Films in Houston, TX, where she works as a filmmaker, a caregiver for her mother, and teaches filmmaking to at-risk teens. She is developing a screenplay for a television series that centers on tribal law and sovereignty. 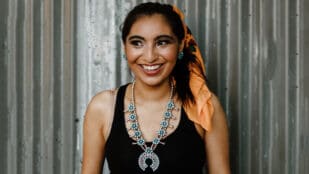 Sabrina Saleha is a Navajo (Diné) and Bangladeshi-American screenwriter and actress based in Atlanta, Georgia. Her work is influenced by her identity as a Native American and South Asian woman. As a first-generation college student, she pursued studies in business that led to employment at a Fortune 500 company in Silicon Valley. In 2018, she left the corporate world to pursue her passion for storytelling. Saleha, who writes science fiction and fantasy, is working on adapting Navajo stories for film and television that accurately represent Indigenous people and cultures through complex and nuanced story arcs. She says she is inspired “to tell stories that reflect her love of her culture” and “to show younger generations that they’re loved and can dream of being whomever they want to be in this world.”

The Institute of American Indian Arts’ Low Residency MFA in Creative Writing program provides a professional degree in creative writing while allowing students to live at home and continue participating in work, family, and community. Students attend week-long on-campus intensives featuring workshops, lectures, and readings twice a year. Each student is matched with a faculty mentor with whom they consult to develop their work in fiction, poetry, creative nonfiction, or screenwriting. The program is unique among low-residency MFA programs in creative writing because it prioritizes the importance of Indigenous writers who offer a voice to the Indigenous experience.

At Warner Bros. Discovery, we believe in authentic, meaningful connection—to each other, to culture, and to our consumer. That’s why we empower fearless storytellers who bring our world into focus—and create cultural touchstones with the power to draw us together. Through best-in-class talent development programs, mentorship, placement opportunities and industry exposure, Warner Bros. Discovery Access serves as a powerful conduit connecting under-represented talent to our content and brands.