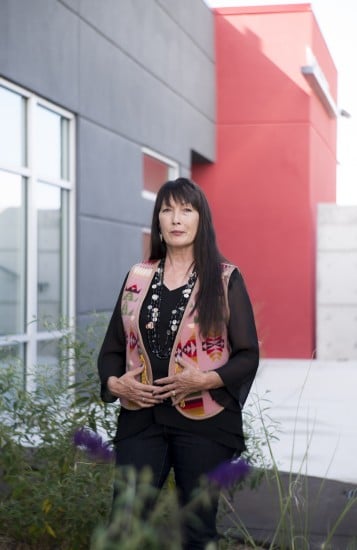 I am Charlene Teters, the Academic Dean of the college at the Institute of American Indian Arts. I am a citizen of the Spokane Nation and well known for my work as an artist, writer, educator, and activist.

After establishing the Racial Justice Office at the National Congress of American Indians, I returned to IAIA in 1992 as Director of Alumni Relations and Student Retention—and later was appointed as a full-time faculty member in the Studio Arts Department. I was promoted to the rank of Associate Professor in 2013. Additionally, I served as a Visiting Lecturer in the Art Department at the Ohio State University and received a two-year appointment as the Hugh O. LaBounty Endowed Chair at the California Polytechnic State University in Pomona, CA. In 2000, I was appointed as the Interim Dean of the Academic Division during IAIA’s transition and move from the College of Santa Fe campus to our new campus.

During my professional career, I have exhibited internationally and maintained an active presence lecturing and delivering keynote speeches and commencement addresses across the United States. I first gained national prominence as a graduate student at the University of Illinois Urbana-Champaign where I led protests against the degrading depictions of American Indian caricatures used as sport team’s mascots and was the subject of the award-winning documentary In Whose Honor by Jay Rosenstein. In 1997, Peter Jennings, ABC World News Tonight anchor, honored me as “Person of the Week”—and in 2002, I received a New Mexico Governor’s Award for Excellence in the Arts.