Adrianne Oo-Ota (Kiowa/Apache) is a screenwriter in her third semester of IAIA’s Master of Fine Arts in Creative Writing (MFACW) program. As a mother of four and a small business owner, Oo-Ota says she has often wondered if she is doing the right thing by focusing on her screenwriting and going into an MFA program. Receiving the WarnerMedia Scholarship has helped her realize that she is on the right path, that she’s closer to achieving her dream than she had realized, and that she does have support.

Not only has receiving the scholarship provided reassurance and encouragement, but with the lift of financial stress, Oo-Ota has had more mental energy to focus on her writing. “As a writer, so much of what I do is thinking,” Oo-Ota says. “The process of being focused—that’s really hard to do when you’re a mother of four and your primary goal is to keep your children fed.” Oo-Ota says she has struggled financially for her entire life and she expected the MFA program to be a reflection of that. She never anticipated receiving a scholarship that would lessen that stress and give her more time and focus to work on her writing. Oo-Ota has often felt that she has had to sacrifice time with her children to work on her writing. Now, with this scholarship she has more time to spend with her children, which in turn has given her more energy to write. 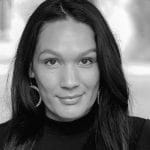 The WarnerMedia Scholarship is awarded to MFACW students whose focus is Screenwriting. In addition to a financial award, the scholarship includes a mentorship. Oo-Ota explains that this mentorship is exactly what Native screenwriters need to close the gap of who is currently telling their stories in mainstream media. “The industry I’m going into is very much like an insiders’ club,” Oo-Ota explains, adding that while many Native artists are highly talented, breaking into industries—particularly the film industry—can be challenging and difficult to navigate due to the networking nature of the industry. This mentorship puts students in direct connection with those who are already in the industry. “I don’t know how else I would be able to break into the industry.”

More so than the connection to someone in the field, Oo-Ota says that she’s excited about the mentorship because it will allow her to learn more about how the industry operates. “I’m excited to be able to ask all the questions I have that I would be too afraid to ask otherwise,” Oo-Ota says. “Learning how to communicate and network in my chosen profession is the hardest part. Writing and putting in the work brings me joy. That part comes easy to me. Networking has always been a struggle.” Oo-Ota says that working with someone in the film industry will help her hone her networking skills.

Oo-Ota expresses how grateful she is to receive this scholarship and to be a part of the IAIA community. “I want to thank IAIA for being such a creative hub for Indigenous creators,” Oo-Ota says. “It’s rare to have a program like this. We need more institutions like IAIA. I’m very grateful and honored to be a part of this program.” 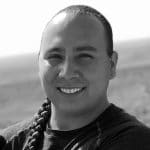 Jiles Turning Heart (Lakota Cheyenne River Sioux), screenwriter and father of three, comes from a medical background, but has always had a passion for storytelling and humor. Being in IAIA’s Master of Fine Arts in Creative Writing (MFACW) program has helped him hone the skills necessary for getting his stories on the page to share with a larger audience. Even still, he has often wondered if his stories have the power to reach a larger audience and if his humor comes across on the page. Receiving the WarnerMedia Scholarship helped Turning Heart realize that there is a large audience for his stories. “My stories deserve to be told,” Turning Heart says. “They reflect who I am and the comedy in my life.”

Turning Heart says that comedy is in his family line. “My grandpa was really funny, so he loves knowing that all my stories are based in comedy.” He explains that comedy has been his main focus when telling stories through a Native lens. “Not all Natives are the same,” he says. “Outside of Indian Country people think that Native America is just this one thing, but each one of our cultures is so different.” The series Turning Heart is currently working on explores these differences through a comedic focus. “Receiving the WarnerMedia Scholarship gives me confidence to continue exploring my comedy and using my own voice.”

In addition to the encouragement and empowerment that comes with receiving the scholarship, Turning Heart says he’s looking forward to the mentorship that is a part of the MediaWarner Scholarship. “Working with a mentor will give us a great opportunity for insight into the production world,” he says, explaining that while the MFACW program is designed to help students refine their craft, this external guidance in what to do with a script once it’s complete serves as the perfect compliment to the program. He also explains that the MediaWarner mentorship is a great opportunity for Native American screenwriters. “It’s not always a natural thing for Native students to just ask mentors and advisors tons of questions,” he says. “The Creative Writing program at IAIA has helped me with that, and with these WarnerMedia mentors, I won’t feel so insecure about asking for help. It’s sort of that first generation experience. First generation students don’t have that path laid out for us by our parents. We’re figuring things out ourselves. With this, they’re helping us fulfill that role of someone who has gone through that whole process and can help guide us to put us on the path of success.”

Turning Heart says that receiving the MediaWarner scholarship has helped him realize his place as an upcoming Native American screenwriter. “Right now there’s such an explosion of Native stories, more so than before. It’s a really exciting time to be a screenwriter. There are so many stories that we have that have never had the chance of being told. Everything we’re studying in the program will help us be successful in contributing to that in a really good way.”

About the Low Residency MFA in Creative Writing Program

The Institute of American Indian Arts’ Low Residency MFA in Creative Writing (MFACW) program provides a professional degree in creative writing while allowing students to live at home and continue participating in work, family, and community.

The program is unique among low-residency MFA programs in Creative Writing because it prioritizes the importance of Native writers who offer a voice to the Native experience. The program and the literature in the curriculum focus on a distinct Native American and First Nations emphasis.

Students and faculty mentors gather twice a year on the IAIA campus for an intensive week of workshops, lectures, and readings. At the end of the week, each student is matched with a faculty mentor, who then works one-on-one with the student for the 16-week online semester, developing the student’s creative work in fiction, poetry, creative nonfiction, or screenwriting.

The important difference in the IAIA program arises from IAIA’s mission “to empower creativity and leadership in Native arts and cultures through higher education, lifelong learning, and outreach.” The program is open to everyone, but the focus is aligned with IAIA’s unique mission. Since its founding in 2013, the program has graduated over 135 students with their MFA degrees—up to 45 students are currently enrolled in four tracks which include poetry, fiction, creative nonfiction, and screenwriting.

MFACW Mentors are a dynamic group of Native and non-Native writers who have won, among many other awards, Lannan Literary Awards, Whiting Awards, a National Book Award, a PEN Open Book Award, a United States Artist Fellowship, and a Donald Hall Prize from the Associated Writing Programs. Over three-quarters of the faculty mentors are established Native American or First Nations authors.

About the Institute of American Indian Arts

Offering undergraduate degrees in Studio Arts, Creative Writing, Cinematic Arts and Technology, Indigenous Liberal Studies, Museum Studies, and Performing Arts, MFAs in Creative Writing and Studio Arts, along with certificates in Broadcast Journalism, Business and Entrepreneurship, Museum Studies, and Native American Art History. The Institute of American Indian Arts (IAIA) is the only college in the nation dedicated to the study of contemporary Native arts. The school serves approximately 500 full-time equivalent (FTE) Native and non-Native American college students from across the globe. IAIA is accredited by the Higher Learning Commission.