Join IAIA Artist-in-Residence (A-i-R) artists Robert “Spooner” Marcus, Katie Dorame, Monty Little, and Luanne Redeye in the Academic Building on the IAIA campus from 3:00 pm–5:00 pm for tours of the artists’ studio spaces. Free and open to the public. 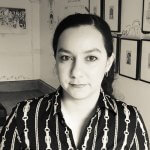