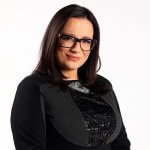 Cherie Dimaline (Georgian Bay Metis Community) is the author of the novels Red Rooms, The Girl Who Grew A Galaxy, and the collection of short stories, A Gentle Habit. Her latest work, a dystopian YA novel, The Marrow Thieves, was released by Cormorant Books in 2017 and has since won the Governor General’s Award for Children’s Literature, the Burt Award for First Nations Metis and Inuit Literature, and the prestigious Kirkus Prize for Young People.The book has been shortlisted for 2018 CBC Canada Reads, the White Pine Award, the Trillium Award and has landed on numerous ‘Best of’ lists for 2017 including National Public Radio, New York Public Library, American Indians in Children’s Literature and the School Library Journal. It was 2018’s #1 bestselling Canadian book and is being adapted for television.

In addition to writing, Cherie has edited numerous publications including Spirit, FNH and Muskrat magazines. She was named the 2014 Emerging Artist of the Year—Ontario Premier’s Award, and was named the first Writer in Residence—Aboriginal Literature for the Toronto Public Library. Cherie also held the position of Writer in Residence for First Nations House at the University of Toronto and faculty for the Humber College Editing Indigenous Manuscripts program and the Humber School for Writers. She sits on numerous literary and arts boards and councils and continues to advocate for Indigenous literature and writers globally, work which has taken her from the Banff, Alberta to Gujurat, India. Cherie works closely with Elder storytellers in the community to carry forward protocols, histories and the stories themselves.

Cherie currently lives in Toronto, Ontario, where she coordinates the annual Indigenous Writers’ Gathering and is building a national Indigenous literary organization. Her next work of literary fiction, Empire of Wild, will be published with Random House Canada and William Morrow in the US, Fall 2019. Her next YA book is forthcoming in Spring 2020 with Penguin Books. 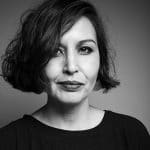 Layli Long Soldier is a citizen of the Oglala Lakota Nation and a poet, writer, and artist currently teaching in Randolph College’s MFA program, and has recently been named Visiting Assistant Professor in Creative Writing at IAIA and will join the faculty in the fall of 2019. Her book of poems Wheras, published by Graywolf Press in 2017, received the PEN Jean Stein Award and National Book Critics Circle John Leonard Prize. The book was a finalist for the 2017 National Book Award. Layli is the recipient of a Whiting Award, a Lannan Literary Award, and a National Artist Fellowship from the Native Arts and Culture Foundation. Her work has been featured on NPR’s On Being and PBS’s NewsHour.

Her poems and critical work appear in Poetry, American Poetry Review, American Reader, Kenyon Review, New York Times, American Indian Journal of Culture and Research, PEN America, The Denver Quarterly, and Brooklyn Rail, among others. In 2010 Q Ave Press published the chapbook Chromosomory, and in 2013 she participated in the art exhibit Pte Oyate at the Red Cloud Indian School.

Layli is a contributing editor at Drunken Boat and the poetry editor for Kore Press, a literary press that publishes poetry, fiction, and nonfiction by women. She holds a BFA in Creative Writing from the Institute of American Indian Arts and an MFA with Honors from Bard College.